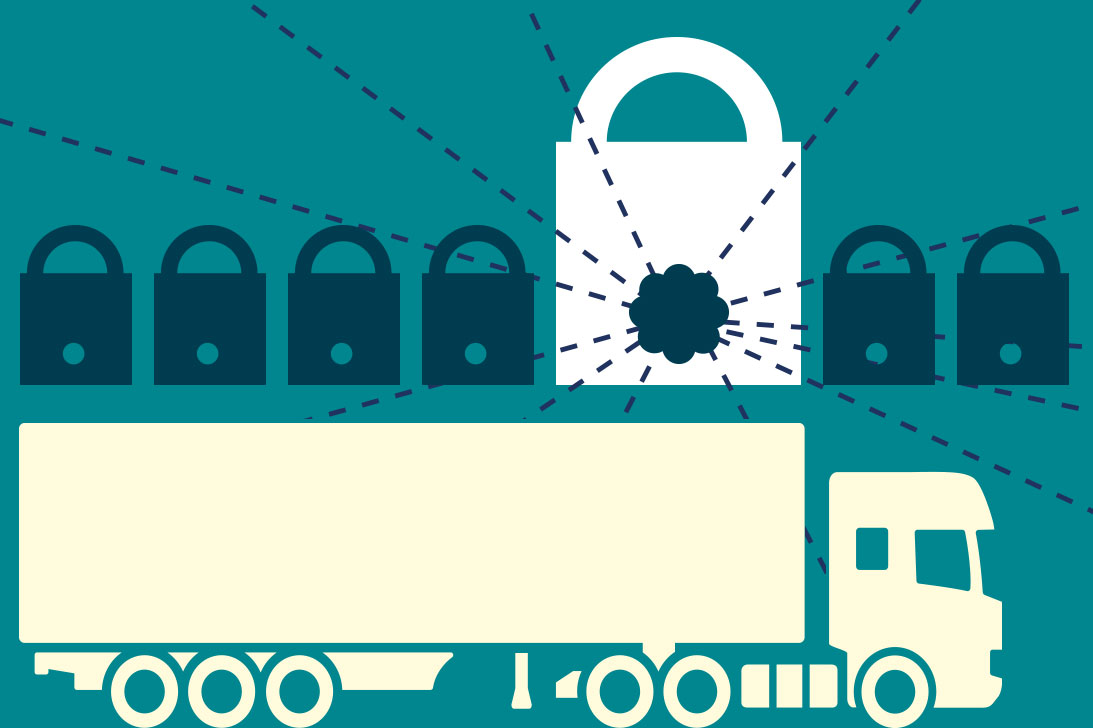 The Full Cost of Cargo Thefts

Stand and deliver …​“Highwaymen” have been plying their trade throughout Europe for hundreds of years; the word first appeared in print in 1617. For today’s highwaymen, truck cargos are an especially attractive objective.​For starters, it’s a target rich environment. In Europe, the motorways are full of trucks moving all sorts of merchandise between major cities, manufacturing areas and ports – all through open borders.​Next, criminal gangs nowadays are well-acquainted with the movement of different goods around Europe, and they often set out with a specific objective in mind; high-value, easily re-sold products like pharmaceuticals, alcohol, electronics, clothing and baby formula are particularly desirable.​Frequently, they just follow the target and wait for the best opportunity to snatch the cargo. That’s often when the driver pulls off the highway for a break. They typically steal the truck, transfer the merchandise as quickly as possible into another vehicle, and drive off, usually to another country. And if the driver is detained during the process, he will often be let go unharmed; at least in Europe, these types of thefts rarely involve violence.​And today, it’s easier than ever to sell stolen merchandise. Many just offer it on online platforms and avoid generating undue attention by selling in small quantities and with only modest discounts. Or they may have arrangements with unscrupulous wholesalers who will buy products without proper documentation.​Plus, the availability of online marketplaces makes the stakes more attractive. With e-fencing, thieves can expect to sell the merchandise for about 70-80 percent of retail value; that’s a lot better than the 25-35 percent they might have gotten in pre-Internet days. So an “average” cargo theft could net around EUR 70 thousand to upwards of EUR 150 thousand or more for a higher value load. While that’s not a huge payday, it’s enough to tempt many criminal gangs; it’s not so much, however, to cause most law enforcement agencies to put a lot of resources into trying to recover the goods.​Finally, in the unlikely event the thieves are caught, the relatively modest size of the theft coupled with its typically non-violent execution means they likely would face no more than one-two years in prison.​The indirect costs are significant​According to FreightWatch International, the value of cargo stolen in transit in Europe in 2013 totaled EUR 11.6 billion. Notably, this was 41 percent greater than in 2007, even though freight volumes were down 20 percent as a result of the economic downturn and Europe’s sluggish recovery. But then, property theft tends to be inversely correlated with the broader economy; thefts go up when the economy goes down, and vice-versa.​This study also estimated the average value of a cargo theft in Europe to be EUR 91 thousand.​And these figures only cover reported thefts. It’s well-known that some companies choose not to report a loss to avoid damaging their reputation / brand.​Moreover, these costs only account for the direct retail value of the goods. Other studies have found that the non-reimbursable indirect costs stemming from a cargo theft are anywhere from four – six times greater than the direct cost.​For example, pharmaceutical products are especially attractive to thieves given their small size and high value. In fact, cargo theft was identified as the top security threat for European pharmaceutical companies. Research into the total cost to pharmaceutical manufacturers from cargo thefts tallied a set of indirect costs including:

Monitor and train employees, plan ahead and harden the target​The priority in minimizing the possibility of a cargo theft is to monitor and train employees. Monitoring is critical since, by some estimates, up to 80 percent of cargo thefts start with an insider passing along information about what, where and when a valuable cargo will be transported.​In addition to training drivers on how to spot and avoid risky situations, they should also be trained on how to respond if they are hijacked. How a driver reacts when confronted by criminals could save him from harm, and could also support recovery efforts.​For high-value items, it’s good practice to instruct the driver not to make any stops soon after picking up the cargo; after a while, the thieves may get bored and abandon the chase. Many companies are also careful to limit travel on evenings and weekends when the risks are greater.​There also are a number of options for making it harder for thieves to get to the merchandise, or to steal the truck. These include physical measures like hard shell trucks, and locking devices that prevent a thief from getting into the cab or that disable the engine.​Finally, installing sensors for tracking and tracing is becoming more common as sensor costs have come down substantially. And they can make a difference. With this approach, however, sensor costs are only one part of the solution. To be effective, someone needs to monitor the feeds – that’s a cost that companies don’t always factor in.​Unfortunately, modern highwaymen will continue to prowl European motorways in pursuit of high-value cargos. As one law enforcement officer commented, “It’s just too profitable.” However, there are many practical steps companies can take to minimize and mitigate this risk, and experienced cargo insurance underwriters and risk engineering specialists can help design appropriate strategies for addressing this threat. And when weighing different approaches, companies should recognize that the indirect costs of a cargo theft, including possible damages to a company’s reputation / brand, are many multiples of the direct costs.​

Putting a Price Tag on Underreported Cargo Theft in Europe, 2016. Retrieved from http://www.sensitech.com/assets/whitepapers/underreportedcargotheftweb.pdf