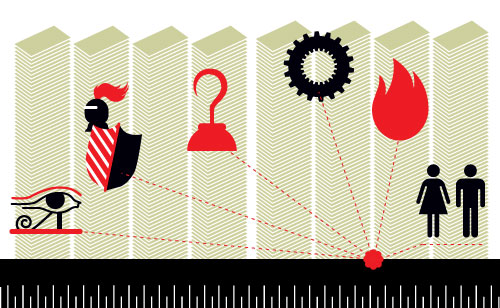 Workers’ compensation programs appear in one form or another in all industrialized countries. One of the earliest appeared around 2050 B.C. It was the law of Ur-Nammu which required the king of the city-state of UR to provide compensation for specific injuries to workers. Ancient Greek, Roman, Arab and Chinese law has had compensation schedules with precise payments for the loss of a body part. In the Middle Ages, however, everything changes. Workers’ compensation programs were replaced by the arbitrary “benevolence” of the feudal lord and became bound up in the doctrine of noblesse oblige: “an honorable lord would care for his injured serf”.

In the 1700s, workers’ compensation programs returned in a surprising way. The story is that pirates - Captain Morgan or Black Bart (Bartholomew Roberts or John Roberts) - created a workers’ compensation system called the pirate code. It was a written agreement that everyone on the pirate ship swore on a Bible to uphold.   The pirate code spelled out how shares of treasure would be distributed, when lights and candles had to be put out for the night, and required all pirates to keep their cutlasses and pistols clean and ready for action. One of the most interesting clauses in the pirate code addressed pirate compensation for injuries: “recompense and reward each one ought to have that is either wounded or maimed in his body, suffering the loss of any limb, by that voyage.”

Pirates were not only compensated for their injuries, they also received a guarantee of life-time employment on the ship - if they survived their injuries. According to Christopher J. Boggs, writing in MyNewMarkets.com, “injured crew members were allowed to remain on board and offered less strenuous duty … creating the first return-to-work program.” The catch? There was no compensation for death.

In an article on “The Economics of Piracy”, Stephen J. Dubner, author at the Freakonomics website, said that the pirate compensation system compared rather well with the 2007 State of Connecticut’s system1:

Some pirate ships even awarded damages for the loss of a peg leg. Peg legs were so hard to come by in the West Indies that a good wooden leg was worth as much as a real one.

In the late 1800s, Otto Von Bismarck (the “Iron Chancellor”) united the various German states into a single empire, similar to today’s Germany. At the time, Germany was in the midst of an Industrial Revolution and German workers were immigrating to the US where they could get higher wages. Otto von Bismarck decided to create a social program that would stimulate economic growth and keep German workers in Germany.

In 1871, Bismarck passed the Employers’ Liability Law, which provided limited social protection to workers in quarries, railroads and mines. In 1884, he pushed through a “Workers’ Accident Insurance” bill, creating the first modern system of workers’ compensation in industrialized Europe. It soon became a model for workers’ compensation programs in Europe and eventually migrated to America.

It wasn’t until well into the 1900s that the US would enact a workers’ compensation program. Before workers’ comp became the law in the US, civil lawsuits were the only way for an employee to seek compensation for on the job accidents. The trouble with this system was that laws heavily favored employers. The system was jokingly known as the “unholy trinity of defenses.”

In 1909, just after Theodore Roosevelt ended his presidency, he wrote an article about a female factory worker by the name of Sarah Kinsley2. Sarah lost her hand when it was crushed in a cogwheel accident while working in a factory. She brought suit against the company for negligence to recover medical bills and lost wages. Despite warning the foreman about the dangers and lack of safety features of the machine she worked with, the courts ruled in the favor of the employer under the “assumption of risk defense”, leaving her and her family with nothing.  President Roosevelt’s article was a turning point in awareness of the need for workers’ compensation in the US. Shortly after the article, many states took notice and began drafting worker’s compensation legislation to reduce the toll of industrial accidents on the workers and their families.

The first worker’s compensation law was enacted in America in Wisconsin in 1911. On March 25, 1911, the Triangle Shirtwaist Factory fire occurred in New York City. This fire was so horrendous that is cited as the defining moment in labor history, modern industrial safety and progressive insurance legislation in the US.

The Triangle Shirtwaist Factory tragedy remains one of the most deadly workplace accidents in North America – 146 workers died and many were injured, an on-the-job death toll only eclipsed by the 9/11 World Trade Center terrorist attack.

While major fires in the early 20th century killed hundreds of people, the horror of the Triangle fire still resonates. Those who died in the fire were mostly young, vibrant women and men. On that fateful Saturday afternoon, the factory had a high concentration of flammables, narrow aisles and locked exits. The building was designed to withstand fire, but lacked adequate fire escapes. Further, rescue ladders couldn’t reach beyond six or seven stories forcing people to face the fire or jump. The owners of the factory were tried for the workers’ deaths, but they were acquitted of manslaughter. Eventually, they paid the families $75 per victim.

Three years after the fire, public opinion and political wrangling led to an amended New York State Constitution and acceptance of the concept of a no-fault insurance system for injured workers, paving the way for the 1914 Workmen’s Compensation Law in New York and the New York State Insurance Fund.

Over 100 years of state-run workers’ compensation

About the authorMaryanne Sherman is President of Sherman Think Tank, a marketing communications consulting firm specializing in writing about re/insurers.

1   The Economics of Piracy (the Real Kind, With Peglegs and Pieces of Eight) by Stephen J. Dubner, September 17, 2007