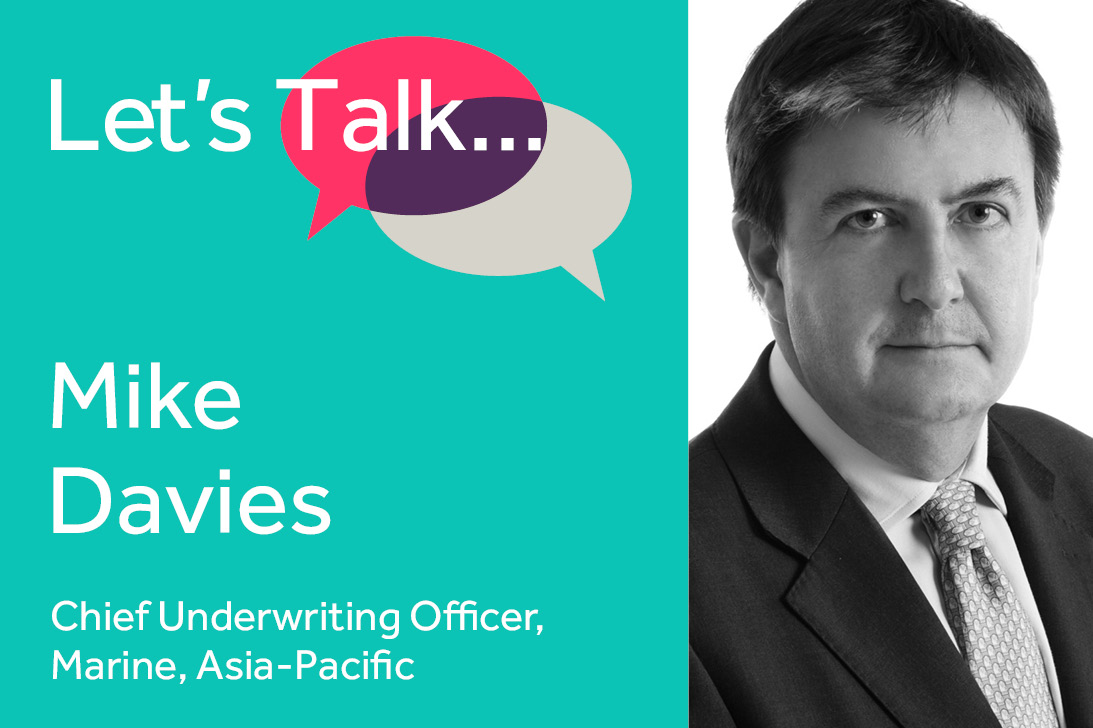 Following the International Union of Marine Insurance’s (IUMI) annual conference this year in Tokyo, Mike Davies shared his views on some of the opportunities and threats facing the industry.

Mike is XL Catlin’s Chief Underwriting Officer, Marine, for Asia-Pacific. He has more than 35 years of experience in marine underwriting and has been based in Singapore for most of the past 20 years. Mike has also held several leadership positions with IUMI, including serving as Vice Chairman of the Executive Committee and Chairman of the Cargo Committee.

The theme of this year’s IUMI conference was “Disruptive times – opportunity or threat for marine insurers?” What’s your view?

There certainly are many disruptions rippling through the logistics industry as well as the insurance sector supporting it.

Disruption, however, is by no means a new phenomenon. Given the industry’s breadth and diversity – maritime shipping companies; air, rail and trucking firms; freight forwarders and logistics providers; and port, warehouse and terminal operators – new competitors, solutions and technologies will always be causing disruptions.

Do today’s disruptions represent an opportunity or threat? Both are distinct possibilities. What’s more relevant is how companies respond when something new and innovative emerges. Disruptions in business are like a wave forming out in the ocean that gains height and speed as it approaches the shore. And companies and even entire industries in its path have two options: build the right surfboard to ride the wave, or be swamped!

Broadly speaking, what’s important for companies across the sector is improving operating efficiencies and resource utilization. And in my view, there are three major waves racing toward the shore that could help companies achieve these outcomes – as long as they have the right surfboard: blockchain and online freight platforms; autonomous control systems and self-steering ships; and connected objects and the internet of things (IoT).

How could blockchain disrupt the industry?

Moving goods around the globe is extraordinarily process intensive. Mountains of data are shared, numerous contracts are signed and executed, and monies are transferred between different participants. Also, the volume and complexity of these transactions grow exponentially as supply chains become longer and more diverse – that often leads to data duplication and reconciliation issues.

For the different participants in this process, blockchain – a secure, decentralized and distributed ledger housed on a shared platform – offers the potential for processing transactions faster, more securely, less expensively and with full transparency. It also enables all parties to have the same version of the truth. For example, data on assets can be digitized and stored on a blockchain that all of the participants in the supply chain can view and update – that would reduce duplication and eliminate the need for reconciliation.

There currently is a lot of discussion, and some controversy, about the potential for partially or fully automated vessels. Some observers predict that many if not most ships in the future will be capable of navigating autonomously. Others are less sure.

In my view, the question is where and how quickly mobile autonomy applications will be deployed, at sea and also on land. Automotive and technology companies, in particular, have invested heavily in mobile autonomy, and the technologies that make it possible are rapidly becoming more sophisticated and less expensive.

There has also been considerable progress in artificial intelligence (AI) in recent years. Developers can now create powerful algorithms that, coupled with cloud-based processing, enable a vehicle – or a vessel – to learn from its experiences and adapt to changing conditions.

Examining the potential impacts these new technologies and applications will have on risk management and insurance is critical. That’s why XL Catlin has partnered with Oxbotica, a spin-out from Oxford University’s internationally acclaimed Oxford Robotics Institute. Our efforts together include analyzing data collected by self-driving vehicles in real-world trials to model the risks, especially when a vehicle is confronted with new, unfamiliar conditions or circumstances.

The maritime shipping industry is actively exploring different possibilities for capitalizing on these innovations. In fact, fully automated ships are currently being tested, and some will be put into operation next year.

The primary benefit of self-navigating ships is that the elements and systems devoted to the crew – including the deck house, galleys and sleeping quarters, HVAC and sewage systems – can be scaled back if not eliminated. That leads to lighter vessels with lower construction and operating costs. Some observers predict that an autonomous ship could reduce transport costs by as much as 20 percent compared to a traditional vessel.

Advances in mobile autonomy and cloud computing are also changing operations on land. Battery-powered, automated guided vehicles (AGVs) are becoming commonplace in ports and warehouses. And cloud-based vessel stowage platforms are being developed to expedite data exchanges between shippers and terminal operators.

How will the IoT feature in the industry?

The proliferation of sensors and connected objects will enable ship owners to monitor the performance and condition of different components and systems with greater precision and reliability.

And perhaps more importantly, outfitting more and more containers with sensors could help the insurance industry to better understand accumulation exposures – essentially how much insured cargo is sitting in a port at any given time.

While it probably isn’t going to happen overnight, I can envision a time when an underwriter can simply press a button and see the value of the goods sitting in a particular location at that moment. That obviously would enable us to tailor our coverages more precisely and bring down reinsurance costs.

Also, the most frequent losses cargo owners and insurers face involve spoilage and theft; sensors in containers could substantially reduce the incidence of these events.

For high value, temperature sensitive goods, being able to monitor temperatures and receive instantaneous alerts is hugely beneficial. If there is a drop or increase in temperature outside defined limits, you can often respond quickly enough to prevent a loss. And reductions in the cost of tracking devices now make it more feasible to secure high-value shipments like pharmaceutical products and electronic devices that are attractive to cargo thieves.

How will these and other developments affect the risk landscape?

While these technological innovations should bolster safety, they also offer opportunities for a new generation of pirates.

The industry already has an admirable safety record. Nonetheless, research shows that about 80 percent of incidents, both at sea and on land, are caused by human error. So the introduction of autonomous control systems should lessen the likelihood of accidents.

At the same time, these technologies and systems can introduce new threats. While the pace of innovation continues to accelerate, the security of many systems/applications lags. Many IoT devices, for example, lack basic protection measures.

These vulnerabilities pose a significant challenge to shipping companies and port operators, and to their insurers. Drug smugglers have already hacked the control system at a major port, and there are examples of autonomous vehicles being commandeered by an “outsider.” Many people are rightly concerned about the possibility of a terrorist organization taking control of a giant self-steering ship.

Among insurers, these developments also have significant implications for our marine risk engineers. In particular, as ships become increasingly automated, marine risk engineers will need to develop expertise in AI, robotics and IT systems, and understand the range of risks associated with these and other advances. And sea-going experience likely will be superseded by know-how in assessing the capabilities and psychological fitness of land-based controllers.

Are there other disruptions that aren’t driven by technological innovation?

The most noteworthy disruption in the marine insurance arena is the geographic dispersion of placements. The London market has been the major provider of marine insurance ever since ship captains and cargo brokers started exchanging information in Edward Lloyd’s coffee shop. In recent years, however, more and more marine insurance is being underwritten in Asia.

That’s not surprising given the rapid growth in exports from Asia to Europe and North America. In fact, more than 50 percent of global container flows originate in Asia/Pacific currently – a figure that will only continue to edge up.

However, only 29 percent of global cargo premium was underwritten within the region in 2015. In an effort to lessen this imbalance, Asian, and especially Japanese, insurers are bolstering their local capabilities while also expanding their operations globally. Singapore, for example, has evolved from a rather secondary market into a regional hub for Asian marine insurance, and a clear alternative to the London market.

The increasing volume of coverage underwritten in the region is also the result of regulatory developments in some countries including South Korea, Indonesia and India. Previously, local insurers would retain only a minimal amount of the premium and reinsure the bulk of it. That also meant, of course, that very little of the premium tax was paid locally. So there are now regulations in these and a few other countries requiring insurers to retain upwards of 40-50 percent of the premiums locally.

A version of this article originally appeared in the Asian Insurance Review.