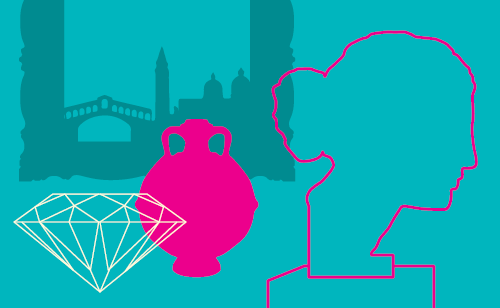 The Value of Venice’s Irreplaceable Art and Artifacts

From trade to tourism

Venice has proved to be remarkably resilient in adapting to shifting circumstances, and its economy and character have changed repeatedly over the centuries. In its current reincarnation, Venice’s economy is based largely on tourism. The central city is a UNESCO World Heritage Site, and the number of tourists who visit daily exceeds the number of residents; on some days, significantly so.

Venice’s tourism-centered economy is not without critics, controversy and challenges. Nonetheless, tourism is likely to anchor Venice’s economy for the foreseeable future.

Even though Venice has been quite adept at adapting to change, one constant since the 13th century is its commitment to the fine arts and architecture; that has never wavered. And while Venice’s appeals to tourists are numerous and varied, its world-class art, artifacts and architecture are certainly a substantial part of the city’s allure.

As a Fine Art & Specie insurer, we offer owners protection in the event their artworks or historic artifacts are damaged, destroyed or stolen. Underwriting these policies necessarily involves ascribing a value to the assets. But in a case like Venice, what is the value of its art and artifacts?

While great works of Renaissance art are frequently described as “priceless,” a more precise answer is “irreplaceable” – Titian only painted The Presentation of the Virgin once. Moreover, there is a well-established market for Renaissance art, and major pieces are still sold today.

Our basic principle for valuing art and artifacts is “fair market value.” Fair market value has always been defined as the fair price a willing buyer will pay to a willing seller for a free and unencumbered transaction. Fair market value is the basis for underwriting Fine Art & Specie coverage. That is the amount we would be prepared to pay if the piece was stolen or completely destroyed. More commonly, however, a piece is damaged. In that case, we’d cover the cost of restoring the piece, plus any loss of value after the restoration.

With art and artifacts, fair market value is always a moving target; that is most obvious with up-and-coming artists who suddenly acquire a following. Values for Renaissance art, on the other hand, tend to be quite stable. For something that hasn’t been in the commercial domain for centuries, if ever, we first consult with major dealers and auction houses about similar pieces that have sold recently. Then we look at the condition of the piece plus any other factors – for example, historical significance -- that could affect its value. Taking all of this information into consideration, we’re able to develop a reasonable estimate of fair market value.

The Palazzo Ducale or Doge’s Palace in Venice houses stunning works by Veronese, Bassano, and Jacopo and Domenico Tintoretto, among others. It also receives more than 1 million visitors per year. While it would be theoretically possible to come up with fair market value estimates for individual pieces, the economic value to Venice of these works collectively is more relevant. For a city like Venice where tourism is the main economic pillar, anything that restricted access to the Doge’s Palace or other major tourist attractions would doubtless have a significant economic impact.

For example, the Treasure of San Gennaro is one of the world’s most valuable collections of jewels, and is a major tourist attraction in Naples. The collection was exhibited in Rome in 2013, and the city of Naples wanted insurance cover for the collection while in transit and on display in Rome. In this case, the value Naples associated with the collection reflected its importance to the Church, and the economic benefit to the city resulting from the thousands of pilgrims who visit each year. And suffice it to say that the economic, and spiritual, value Naples estimated it derives from the collection is very large indeed.

The enduring allure of Venice is also a testament to its broad value to humanity. UNESCO notes that “Venice is a unique artistic achievement …. In this unreal space, where there is no notion of the concept of terra firma, masterpieces of one of the most extraordinary architectural museums on Earth have been accumulated for over 1,000 years.”[1]

Matthew White, Chair of the Board of Directors for Save Venice Inc.,[2] describes Venice as an “immeasurable gift to the world.” He adds, “The sheer beauty of the place is enough, but add the history and its astonishing art and architecture, and there is simply no way to quantify the impact of this city on the world. Venice belongs to all of us. This is even more meaningful at a time when extremist groups are destroying architectural sites.”

Matthew also notes that the power of Venice’s art is amplified by the fact that most pieces remain in the exact spot for which the artist created them hundreds of years ago. “This is not like viewing a Titian or Veronese in a museum. Not to diminish that experience, but to see a Titian in the room that Titian painted it for, with the light, and the sounds of the city remaining, it’s a profound experience.”

The Report of My Death Was an Exaggeration[3]

In the late 13th century, Venice was the most prosperous city in Europe. However, its influence as a maritime power waned in the 17th and 18th centuries to the point where the poet Lord Byron wrote in 1812, “In the fall of Venice think of thine.” A few decades later, John Ruskin wrote his three-volume treatise on Venetian art and architecture, The Stones of Venice, in part to describe the city’s treasures for future generations who Ruskin believed would never see them.

Today, Venice remains one of Europe’s most prosperous cities, and virtually all of the art and artifacts Ruskin described are still intact. Numerous public agencies as well as private organizations like Save Venice are working diligently to protect, preserve and restore Venice’s immense cultural and artistic heritage. And whatever the value of Venice’s art and artifacts – monetarily, economically, intrinsically – the fact that they remain accessible today and hopefully far into the future is something we all should treasure. Or as Save Venice puts it, “As long as Titian’s The Presentation of the Virgin lives, the human spirit will never die.”

[1] http://whc.unesco.org/en/list/394 [2] Save Venice is an independent, charitable organization whose mission is to “protect the cultural patrimony of the city by raising funds to restore its monuments and works of art.” http://www.savevenice.org/ [3] With apologies to Mark Twain