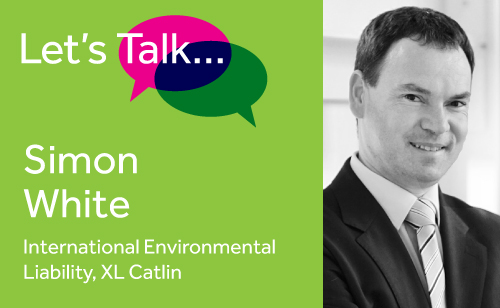 Pollution; it can be a messy business. Many companies think they will never be involved in an incident and those that do acknowledge the threat often seriously underestimate the risks. For those organisations that do cause pollution, the combined costs of clean-up, fines and remediation can be severe. However, the cost to an organisation’s reputation can be just as severe.  The risk of causing a spill affects a surprisingly wide variety of industries and being named and shamed as a polluter in the media can have serious long-term effects on brand and public image.

As an Underwriter covering environmental risks, Simon White, Head of Underwriting, International Environmental Liability at XL Catlin, has seen the fallout for organisations causing pollution incidents, especially in those unprepared to address such issues. Simon and his team have been particularly interested in how pollution incidents are reported in the media, so for this reason, undertook a project tracking media reports of pollution incidents in the UK over the last five years, noting details on fines, clean-up and remediation costs and prosecutions.

We speak to Simon about the findings.

You’ve been looking at media reports of pollution incidents – why is this important?

“We started to see a significant number of headlines on pollution in the papers, so we decided to run a project looking at press reports, including specialist trade magazines and online data sources. Using these sources, we started to compile a list of all of the pollution incidents that were being reported. What we wanted to understand is what kinds of companies, in what kind of industries, in what part of the country were making the headlines. The key objective was to help brokers and clients to understand what the full impact of environmental risks are today.

“Insurers and brokers often find it difficult to articulate environmental risks to clients. The problem is that there is a lack of information to illustrate the risk. What this project has shown is that the smallest to the biggest company can suffer a pollution incident and have its reputation affected by negative headlines.”

How badly impacted can a company’s reputation be?

“I think social media has changed the landscape. Look at the corporate tax issues; how quickly that spread across social media and how difficult it was for some of the largest companies out there to deal with that issue.

“For businesses, you’ve got two aspects to this. Firstly a pollution incident can have a direct impact on your relationship with your customer and secondly you have the risk of the public fallout. Even with local or regional press – if a business has caused significant pollution in a given area, often a lot of that business’ trade will be located there. So you’ve got to be very careful about how you act, it’s important to understand not just how to deal with pollution incidents, but also reputational issues.”

Has there been an increase in the number of pollution incidents in recent years?

“According to the UK’s Environment Agency’s data, the number of recorded pollution incidents has stayed relatively stable over the last 10 years. But that still equates to two significant incidents a day. There has been a slight rise in that number over the last two years which is quite worrying. It’s too early to say what is causing that, but the key point for businesses and insurers is that pollution occurs on a regular basis and the cost of dealing with that pollution has significantly increased.

“Over the last 10 years we have seen a significant increase in the cost of dealing with cleanups and in the last few years we have seen an increase in the cost of fines. The government introduced new fining guidelines, so anyone who pollutes is now getting hit with two large costs, fines and cleanup. Most are unaware of this and would really struggle to deal with those dual costs should they be imposed.”

Why do you think so many companies believe they are covered for environmental incidents when they often aren’t?

“I think there has been a general misunderstanding as to what is covered under existing policies. If you go back to the 1970s your general liability policy would have covered all your pollution exposures. Then in the early 1990s there was an explosion of environmental legislation. Governments really took control of pollution.

“The trouble is that businesses never really kept up with how this legislation changed. In essence it developed so quickly, a lot of people didn’t realize how environmental liability regimes had grown. There was a lack of knowledge about what these statutory measures really meant and as such most people continued to ignore it. It came to a head following a case in 2006; it was ruled that the general liability policy wording only responded to claims from the third party asking for compensation for bodily injury or property damage. It doesn’t respond to a regulatory body demanding action to be taken to clean up pollution.

“There have been a lot of articles in the press about it and a lot of information put out there generally. But even with all of that businesses are still struggling to get a clear understanding as to what’s covered and what’s not - we’re trying to work out why that message still isn’t getting through. It needs to get through now, because the cost of dealing with pollution today is far more expensive than it was 10 years ago. We’re seeing companies becoming insolvent because of it.”

Are people becoming more aware of these risks?

“People have to become more aware - environmental issues aren’t going away and the public are getting less and less tolerant of pollution.

“This also relates to the image risk. You don’t want your name all over the press as an entity which has caused significant pollution. So there is a multitude of factors which mean businesses have got to become better educated, but everyone has a part to play. Governments have to play a part in making data more readily available and the insurance industry can help by showing what the true cost of pollution is. We all need to work together to help businesses make proper risk management decisions about their environmental exposures.”

What actions should be taken by businesses to protect against the risks?

“There is really good data on pollution prevention systems available. You can go through the guidelines the EA (or local equivalent) and other sources provide online, or you can get an environmental consultant to conduct an independent review to get the best guidance on what you can do to limit your exposure.

“Prevention is always the cheapest and most preferable route. But remember, 40% of pollution incidents are caused by failures of systems. You should always make sure that your company does not become insolvent for something that you could have easily put in place some balance sheet protection for.”

Want to know more? You can reach Simon on: simon.white@xlcatlin.com