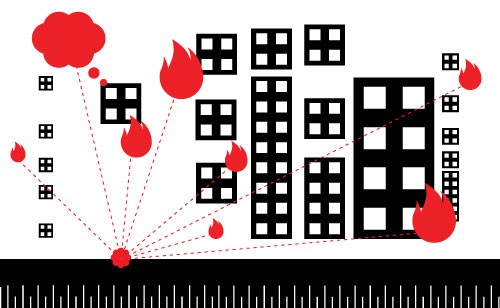 Sparks of Genius: What Benjamin, Samuel and Ebenezer Started

Homeowners insurance is big business in the US. In 2012 alone, it accounted for over $72 billion in premiums.1 However, today’s homeowner insurance policy is very different from the first homeowner policies that were written. The first policies covered only fire.  Today, homeowner’s insurance covers multi-perils that include fire, theft, lightning, wind, explosion, hail, riot, vehicle damage, vandalism, smoke and more.

Homeowner’s insurance can be traced back to Rome, but it took the 1666 Great Fire of London to turn it into a business. The London fire destroyed more than 13,000 houses and displaced about 100,000 people. The first fire insurance company was formed in London in 1681 by Nicholas Barbon and eleven associates. Called the “Insurance Office for Houses”, its purpose was to insure brick and frame houses against fire. By 1720, fire insurance became a booming business in London.

In 1735, it first appeared in America. An entrepreneur in Charleston, South Carolina founded the Friendly Society of Mutual Insurance and sold one of the first fire insurance policies in the US. However, his company, perished in the great 1750 fire of Charles Towne (known today as Charleston) which wiped out nearly the entire town along with the insurance company.

Enter one of America’s most original thinkers

Around 1736, Benjamin Franklin enters the picture. He lived in Philadelphia and was worried about how vulnerable the city was to fire. Most of the homes and buildings in Philadelphia were wood frame and highly-susceptible to fire. Franklin came up with the idea of a volunteer fire organization.

Franklin’s volunteer fire organization consisted of approximately 30 volunteers from the community, who met periodically to discuss fire-fighting techniques. The buildings protected by Franklin’s organization were given red fire buckets which were placed in front of or on a home or building, identifying where the volunteer firemen should go if a fire broke out.

As the volunteer system expanded, it was apparent that the system had some serious flaws. Often, rival volunteer organizations would ignore a burning building if they discovered that the building wasn’t insured by their organization.

The success of the volunteer fire organizations led Franklin to go one step further and create America’s first successful fire insurance organization. In 1752, he founded the Philadelphia Contributionship for Insurance of Houses from Loss by Fire, more commonly known as Hand-in-Hand.

Franklin’s organization offered fire insurance on brick and stone buildings only. Further, he would not insure a building that had a tree next to it.  William Penn, one of the founders of Philadelphia, intended the city to be a “Greene Country Towne” and the principal street names included Spruce, Walnut, Locust and Pine.  By 1784, Philadelphia’s tree lovers rebelled against Franklin’s restriction and formed another fire organization called appropriately the Mutual Assurance Company for Insuring Houses from Loss by Fire or the Green Tree, as it was more popularly known.

During and after the Revolutionary War

In the US, the immediate postwar Revolutionary period was one of economic depression and an unstable currency. By 1781, there were only seven corporations in America and in the next 10 years only 25 more were organized. The first bank, the Bank of North America (from which INA later drew its name) was founded in 1780. Only two more banks, in New York and Boston, had been established by the end of the decade. Seven out of every eight ships in American harbors flew foreign flags, mostly British.

The insurance market was primarily in London, because American underwriters, joining together in a syndicate, could not write more than $25,000 coverage. Further, communications between Britain and America were slow and claims could not be settled promptly by London. With the ratification of the Constitution, the nation had a responsible central government and a stable currency. One of the first acts of the new Congress was passage of the Funding Act of 1790, creating federal securities. On Wall Street, brokers organized the New York Stock Exchange, one of the first indications that the national economy was ready to grow.

It was at this point in time, that two unusual personalities enter our story: Samuel Blodget, Jr and Ebenezer Hazard. Samuel Blodget was a “wartime captain in the New Hampshire militia, postwar dabbler in China trade, would be-speculator in real estate in the federal capital on the Potomac and manager of the Boston Tontine.” Ebenezer Hazard was “the son of a wealthy merchant who spent three years aboard British men-or-war and privateers. He was a merchant and scholar, and would gain fame as one of America’s early business leaders.”  1

In 1792, Blodget and Hazard formed the first stock insurance company in America, the Insurance Company of North America (INA). The company’s original plans authorized it to write life, fire and marine insurance. However, the first two were largely neglected at first. Life insurance had a bad reputation based on Tontines experience in Boston. Formidable competition in the fire line came from Franklin’s Hand-in-Hand and the Green Tree. In 1793, INA added fire insurance to its product line, offering both marine and fire insurance in the U.S. The homeowner’s policy first sold by INA in 1793 remained the basic fire insurance policy sold in America until well into the twentieth century.

Fast Forward to 1950 and today

In the mid-twentieth century, INA was still alive and well. As the largest and oldest company of its kind in the US, the company continued its streak of innovations. In September 1952, it introduced a unique package homeowner’s policy that revolutionized the insurance world. 3

The package policy offered insurance coverage for fire, theft, lightning, wind, explosion, hail, riot, vehicle damage, vandalism and smoke. The estimated cost of a 5-year package policy was between $88 and $100, approximately 20 percent less than the combined premiums (about $125) on separate policies.

The introduction of the package policy had a huge impact on the insurance industry and on American society in general.  Today, nearly 95 percent of US homeowners have insurance that includes fire and other perils in one single policy. 2

The introduction of the package insurance policy also had a tremendous impact on two other industries: the banking, savings and loans financial industry and the home building industries. The coverage offered by the new comprehensive policies offered lenders more security, while the less-expensive coverage made homeownership more affordable.

The package policy can be said to have fueled the US building industry and, ultimately, to have helped grow the US economy, growth made possible by an innovative, new insurance form.

About the AuthorMaryanne Sherman is President of Sherman Think Tank, a marketing communications consulting firm specializing in writing about re/insurers.