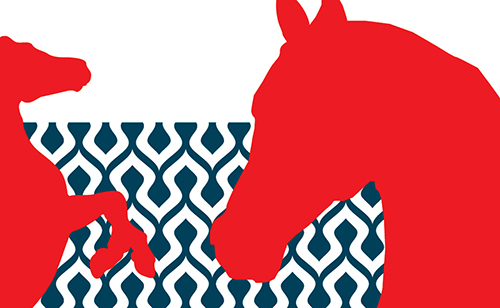 The Arabian Horse: A Distinctive Beauty

The first pony I ever had was half Arabian, half New Forest—incredibly fast, intelligent, and beautiful. It was then that my lifelong passion for horses began, and I have been lucky enough to combine this with my career as an underwriter. A Long HeritageArabian archaeological remains of the Arabian date back 4500 years and the five strains of the breed today are said to descend from Muhammad’s five faithful mares. Intelligent, good-tempered, agile, swift, and with remarkable endurance, Arabians served as the hunting horses, racehorses, and warhorses of the Ottomans and ancient Egyptians. They became an integral part of Middle Eastern culture and much treasured companions on long treks through the arid, harsh desert. It was—and still is today—a high honour for a dignitary to receive an Arabian as a gift.The Europeans also bred cavalry bloodlines from Arabian acquisitions during the Ottoman Wars. By the mid-19th century, those bloodlines had become diluted, so the aristocracy sent envoys to the Middle East for more purebreds. Unfortunately, the world wars destroyed many of the stud farms across Europe, and the breeding revival in Europe only fully resumed after the Cold War.The Arabian Aesthetic No other horse breed is judged for its sheer beauty like the Arabian. Even those outside the equine world recognise Arabians as the aesthetic ideal: a distinctive, crescent profile with large eyes, delicately flared nostrils, an arched neck, a long flowing mane, a lovely high-carried tail, and a free-floating movement unrivalled by other breeds. No wonder the Arabian is the horse depicted most often in historical relics.Just as a lady doesn’t wear a ball gown to the supermarket, and a Van Gogh isn’t displayed in the office reception, you don’t buy an upper-echelon Arabian to ride. You simply stand back in awe of its beauty and magnificence. Elite BreedingThe Arabian owes its longevity and bloodline purity largely to the skill and devotion of Middle Eastern breeders. Although the top stallions may fetch as much as USD 5 million, this value is derived from the noble lineage of the horse, rather than being a strict, commercial value. Unlike a thoroughbred stallion, which might be bred to 100, or even 200 mares each year, most champion Arabians are not bred to achieve a profit or sold for their peak value.Instead, a prized stallion is likely to live a full 25 to 30 year life with his family, and is bred to only 10 or 12 mares a year—an honour mainly conferred on mares of equally select lineage. The goal is to create equine royalty of ever greater beauty. Families who preserve and protect these bloodlines through successive generations pay tribute to the breed and its ancestry.Protecting Prize ArabiansIn today’s vibrant, global equine industry, a growing number of enthusiasts attend exciting international events hoping to catch a glimpse of a champion Arabian. Although individual owners usually allow their horses to be shown only once or twice per year, in general, the number of horses travelling to these events has increased.Of course illness can strike anywhere, but the hardships of travel represent the greatest threat to an Arabian’s safety and wellbeing. Even under the best care and conditions, travel can be a jarring contrast to the comforts of home. Flights can be held up and horses then kept waiting in the heat on runways. Air pressure and poor air quality are also considerations when flying horses around the world. Like some people, some horses are affected severely, and respiratory illness is not uncommon. If this or any other kind of accident occurs when a veterinary surgeon is not nearby, problems can arise very quickly. Statistics show that approximately three out of every 100 horses may die or must be put down because of injury, illness or disease within a given 12-month period.Although Arabian beauty is to some degree, in the eye of the beholder, the growing demand for Arabians far outstrips their availability worldwide, and continues to drive up the value of champion horses.We work with Arabian experts with twenty or more years of experience, to establish the market value of each individual horse, providing guidance to help mitigate the risks faced by this incomparable species. To respond to various insurance needs, we have recently introduced a new, global, Shariah compliant equine insurance product, written at Lloyd’s of London. This policy offers a fully compliant, community-based, Shariah policy, with the capacity to cover any Arabian, from a foal sold for USD 5000 to a champion valued at USD 5m, year round, whether they are at home or travelling to shows around the world.  Want to know more? You can reach Guy on: guy.morrison@xlgroup.com