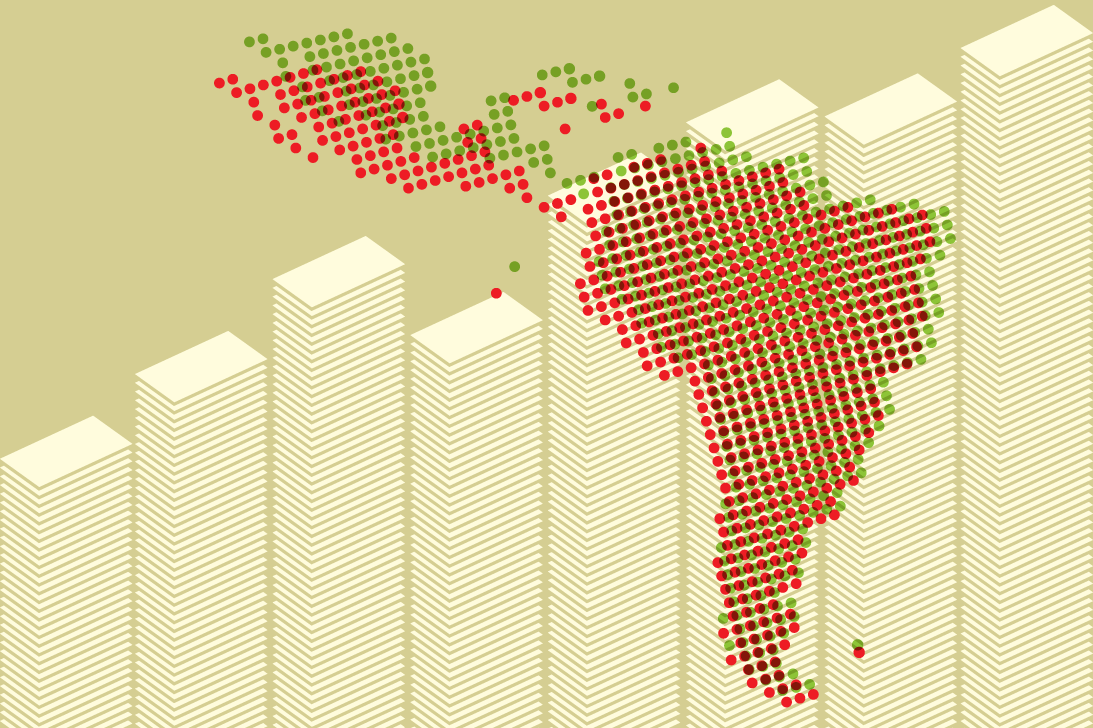 Foreign investors continue to see great opportunities in markets across Latin America, but they are keenly aware that one of the region’s major risks is political instability.One constant in Latin America is the speed of change. Conditions, government administrations and risks can—and do—change. With change comes a need to review and sometimes revise risk strategies, including the purchase of political risk and trade credit insurance to protect people, assets, investments and cash flows.

Looking across Latin America, one sees a lot of change. Brazil has gone from a steady influx of foreign direct investment and rapid gross domestic product growth over the past decade to a deep recession since 2015, according to World Bank data. Argentina, meanwhile, has emerged from decades of difficulty and isolation in the world economy to a bright horizon of tremendous development. After decades of booms and busts, in 2001, Argentina defaulted on its sovereign debt, plunging its economy into a crisis in which unemployment soared and the Peso lost much of its value. By 2003, financial reforms and growth in exports put Argentina’s economy on the path to recovery. Hard to envision just a few years ago, Argentina today is among the region’s most attractive opportunities for strategic investors.​

Venezuela is particularly challenged and remains a very risky place to operate. Some large foreign investors have made the difficult decision to leave the country, a reality of Venezuela’s ineffectual political regime and its heavy reliance on a commodity such as oil, whose price has dropped steeply in the past year. My colleague, Rafael Docavo-Malvezzi, XL Catlin’s Global Risk Manager for Political risk and Trade Credit Insurance, discussed this dynamic in a recent Fast Fast Forward article you can read here. About 95 percent of Venezuela’s export earnings come from oil revenues, and the oil and gas sector accounts for 25% of its gross domestic product, according to data from the Organization of the Petroleum Exporting Countries. There is hope for future growth in Venezuela, but at the moment it’s hard to see a smooth political transition to facilitate the country’s reversal of misfortune.​

One area where governments and the private sector are increasingly forging partnerships&mdash;and where the need for risk management is great&mdash;is infrastructure projects.

Mexico, the second-largest economy in Latin America, has a lot of positives. With about 80% of exports going to the United States, Mexico’s fortunes tend to follow the U.S. economy. Right now, that means there are strong opportunities for investors looking at Mexico. The World Bank forecasts a moderate slowdown in Mexico’s growth in 2016 but notes the country’s fiscal policies are continuing to produce financial stability. A history of drug problems and violence, however, has had a dampening effect on Mexico’s GDP growth.​

Other attractive investment opportunities in Latin America include Colombia and Peru. Over the past decade, Peru has been among the region’s fastest-growing economies, with inflation averaging 2.9 percent, according to the World Bank.  Colombia, long plagued by an illegal drug trade and armed conflicts, has made strides to advance peace, rural development and justice. Even markets that appear to have high risk can offer good opportunities for investors willing to look deeper and select the right partners.​

One area where governments and the private sector are increasingly forging partnerships—and where the need for risk management is great—is infrastructure projects. Throughout Latin America is the need to improve roads and infrastructure. Commercial traffic is driving the development of state-of-the-art toll roads and facilities. Banks and investors see toll road projects as significant cash generators over time, but they also are keeping an eye on trade credit and political risks.​

Political risk and trade credit insurance enable investments to proceed by providing critical support for project financing. Without such protection, some infrastructure projects might never happen in Latin America. There is still a need for the major political risk coverages for political violence, contract frustration, expropriation and currency inconvertibility, though in recent years there has been increased emphasis on protecting cash flows through trade credit insurance.​

XL Catlin is able to offer broad coverage products, vast experience in supporting banks, investors and public-sector agencies, and we can align policies with the duration of strategic investments, with tenors of up to 15 years. The ability of private insurers such as XL Catlin to collaborate with our public-sector counterparts, export credit and multilateral agencies, provides an array of options for protecting investments in Latin America. ​

Investors and lenders looking to pursue growth in Latin America should look closely at the many opportunities in the region and select partners with expertise, financial strength, capacity and commitment to supporting their success.​

Dan Riordan is president of Global Political Risk & Trade Credit Insurance at XL Catlin. Before joining XL Catlin, he held various senior executive roles in political risk, specialty and global corporate property and casualty insurance at a leading global insurer. He has had a long association with the Berne Union, an international association of export credit insurance organizations, serving as president from 2013 to 2015.

NOTE: A version of this article appeared in LatAm Insurance Review. XL Catlin gratefully acknowledges the publisher’s permission to republish the content on Fast Fast Forward.