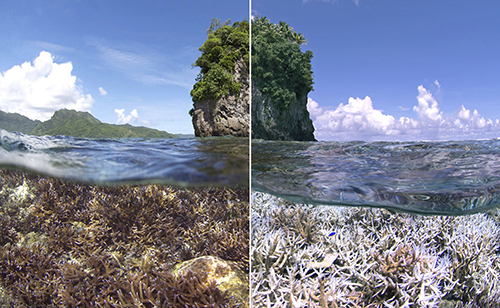 A consortium of ocean scientists, reef mappers and community-based monitoring teams, including the National Oceanic and Atmospheric Administration (NOAA), XL Catlin Seaview Survey, The University of Queensland, and Reef Check, today confirmed a “global coral bleaching event” is underway. Increased ocean temperatures due to climate change, combined with the warming effects of an El Niño pattern and a Pacific warm water mass referred to as “The Blob”, are driving temperatures to record levels and threatening to severely deplete the coral reef ecosystems that support fish habitats, shoreline protection and coastal economies.

The announced global coral bleaching event, only the third of its kind in recorded history, is expected to impact approximately 38% of the world’s coral reefs by the end of this year and kill over 12,000 square kilometers (4,633 square miles) of reefs, according to NOAA. Although reefs represent less than 0.1 percent of the world’s ocean floor, they help support approximately 25 percent of all marine species. As a result, the livelihoods of 500 million people and income worth over $30 billion are at stake.

A summary of these findings, as well as new information about coral bleaching and never before seen high-resolution imagery, has been specially developed to explain the event: http://www.globalcoralbleaching.org/.

The declaration of the 2015-16 global coral bleaching event was confirmed by NOAA after its bleaching predictions were verified by scientists and citizen scientists in the Atlantic/Caribbean basin including rapid response surveying teams from the XL Catlin Seaview Survey, The University of Queensland and Reef Check. These reports added to the growing list of reports in the Pacific and Indian Oceans.

Oceans absorb approximately 93 percent of the increase in the earth’s heat from climate change, making them one of the most visual indicators of the issue – particularly when change is revealed through dramatic episodes like global coral bleaching. During a bleaching event, corals expel the golden-brown algae that grow within their body tissue, exposing their white skeletons—hence the term “bleaching.” If the ocean temperature remains higher than the seasonal norm for a number of weeks the corals can die en masse, causing the loss of some corals that may be decades to centuries old.

Bleaching can transform healthy coral reefs into reefs dominated by other organisms such as seaweeds. This can take decades to reverse and will only happen if conditions become hospitable for corals again.

This year&rsquo;s widespread bleaching shows the same characteristics &ndash; warmer-than-usual water temperatures combined with what could potentially be the strongest El Ni&ntilde;o ever recorded.

Caused by an unusual warming of the Northern Hemisphere oceans, 2015 has now seen coral bleaching occurring in reefs in the northern Pacific, Indian, equatorial Pacific, and western Atlantic Oceans. Recorded for the first time in 1998 and again in 2010, global coral bleaching is designated when all three major ocean basins (Indian, Pacific, Atlantic) have recorded widespread bleaching episodes across multiple reefs spanning 100 kilometers (62 miles) or more.

The first two global bleaching events were observed as the result of a chain of warming events caused by El Niño cycles and increased ocean temperatures due to climate change. This year’s widespread bleaching shows the same characteristics – warmer-than-usual water temperatures combined with what could potentially be the strongest El Niño ever recorded.

Coral bleaching in the Pacific Ocean began in mid-2014 and has not stopped since, moving around as warm conditions have enveloped different regions. Ongoing research from NOAA and The University of Queensland scientists, in collaboration with Reef Check volunteers, has found significant impacts on coral reefs in the Hawaiian Islands and Florida Keys.

At the same time, moderate impacts have also been documented across the northern Caribbean region – South East Florida, Cuba, Turks and Caicos, and Dominican Republic. This widespread bleaching event is occurring across multiple coral species at each affected reef. Thermal stress and bleaching are also triggering a greater incidence of coral diseases, which can be equally fatal for coral reef communities. Similar to past global coral bleaching events, this year’s phenomenon is greatly intensified by climate change and, with forecasts of the El Niño remaining strong until early 2016, the worst may be yet to come.

During the previous global coral bleaching event of 1998, the world simply didn’t have the technology, understanding or teams in place to reveal and record such events properly. However recent advancements in bleaching prediction and near-real-time satellite monitoring by NOAA has allowed the XL Catlin Seaview Survey and its University of Queensland partner to deploy a rapid response team to capture images of coral bleaching as it happened. By documenting the various stages of the bleaching process, XL Catlin Seaview Survey scientists from The University of Queensland are gathering in-depth insight into the marginal and cumulative impacts of this event and building on more than 20 years of data in published studies collected from bleaching episodes worldwide.

Primed for immediate deployment to locations where major coral bleaching is taking place, XL Catlin Seaview Survey’s Rapid Response team uses their advanced SVII camera and other technologies to gather visual and quantitative data of bleaching. The revolutionary camera system is attached to an underwater scooter that takes about 1,000 high-resolution 360-degree underwater images across distances of up to 2 kilometers (1.2 miles) in a single dive – increasing the team’s data-gathering efficiency 30-fold compared to previous methods. These images are added to the XL Catlin Global Reef Record, an online research tool that allows scientists and resource managers to better analyze and monitor changes in the global reef ecosystems on a local, regional, and global level. The data collected will also help scientific research teams advance their understanding of coral recovery and support future restoration efforts.

The rapid response reef survey work is extended by Reef Check. Thanks to its global network of trained teams of volunteer citizen scientists, Reef Check plays a key role in assessing the health of the coral reefs across affected coral regions.