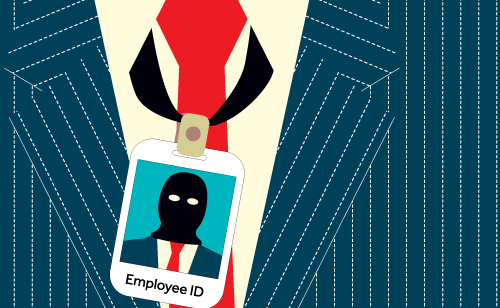 Protecting Financial Institutions from being bamboozled, cheated or robbed

For cash-strapped or simply dishonest individuals, working in a financial institution can be equated to a “kid in a candy store.”  Tempting.  Each year, fidelity and crime insurers incur more than $300 million in losses by protecting organizations, including financial institutions from crime, the vast majority of which carried out by their own employees.  Unable to resist the temptation of working around money and securities, many embark on schemes to cheat their employers out of thousands, tens of thousands or even millions.    And we don’t have to look far for dishonesty-in-action examples.  The news provides plenty:Warning SignsAccording to the Association of Certified Fraud Examiners (ACFE),  most employees who commit fraud or embezzlement show warning signs like living beyond their means, having financial difficulties, having unusually close relationships with vendors, and having excessive control issues. If you are alert and vigilant, you may be able to detect and prevent these business losses. ACFE encourages businesses to look for a number of warning signs to spot an employee likely involved in a fraud or embezzlement scheme:  –  An employee who refuses to take vacation (This is why  financial institutions adhere to a policy where employees must take two consecutive weeks of vacation each year.)–  An employee who continually works overtime–  An employee who wants to take work home–  Excessive personal spending by an employee whose income does not match extravagant spending.Balance Sheet DrainDishonest employees are not the only exposure that financial institutions face these days.  Robberies still occur.  Sometimes they occur from external parties and sometimes those external parties get a little help from the inside.  Recently, the Los Angeles Times reported that FBI agents dug up about $600,000 of a missing $1 million stolen in an armored-car heist.  The backyard belonged to the armored-truck driver who was convicted of pulling off the theft.  According to the US Federal Bureau of Investigation, in 2014, nearly 4000 financial institutions, including commercial banks, credit unions and armored carrier companies were robbed. And while in most cases, they are not as dramatic events as in the days of legendary bank robbers like Baby-face Nelson, Bonny and Clyde or John Dillinger, robbery is still a very real exposure for banks and other financial institutions.  If stolen money is not recovered, it comes directly out of the financial institution’s reserves, and that can be a hard hit to their balance sheet.Crime StoppersWhile it may be a bit hard to predict and prevent a robbery plot, there are a number of controls that financial institutions should have in place to try to prevent crime schemes before they even start.  Even if they do, the right controls will boost the likelihood that wrongdoing will be discovered to put a quick end to it.
If loyal employees know what to look for, they will be a financial institution&rsquo;s most effective first line of defense.

Many embezzlement schemes are detected during audits.  Auditors are trained to look closely and examine significant unusual transactions outside of a financial institution’s normal business operations. They follow the lengthy manual of general standards for internal controls, information systems and audit programs published by the US Federal Deposit Insurance Corporation, which aids financial institutions in preventing or at least minimizing fraud.   The separation of duties is also a key deterrent.  Having multiple people touch financial transactions can be effective in making an employee think twice about trying anything in the first place for fear of getting caught by the vast majority of honest employees on the payroll.  If an employee has enough chutzpah to try anyway, shared duties helps assure that another diligent employee will catch on and report the problem sooner, than discovering it later, when a financial institution’s money is already out the door and spent.    Education is another vital part of controlling crime.  If loyal employees know what to look for, they will be a financial institution’s most effective first line of defense.  Likewise, financial institutions have to show that they are serious about not only preventing crimes like embezzlement but also prosecuting them.  This is especially true for financial institutions whose reputation rests on effectively protecting others’ money and assets.  Bond, Financial BondEven with the best fraud controls in place, businesses can find themselves faced with losses from a variety of crimes.  To protect financial institutions and their balance sheets from this kind of crime, many rely on Financial Institution Bond insurance.   Financial Institution Bonds first evolved at the beginning of the 20th century.  They have a close kinship to surety bonds, which have an even lengthier history, going back to the Magna Carta.  As the banking system grew in the early 1900s, the industry had to hire many new, unexperienced employees which increased its exposure to employee dishonesty and insurers responded to these needs with “honesty insurance.”  And as we’ve discussed, dishonest employees aren’t the only threat to financial institutions now, or then, as there has always been the threat of robbery and other risks.  Banks at the time bought separate insurance policies to cover various exposures until the Surety & Fidelity Association of America (SFAA), with the cooperation of the American Bankers Association, developed what they called a “Bankers Blanket Bond.”  This was the first multi-line insurance form that address many bankers’ risks and it led the way to the development of today’s “Financial Institution Bond.”  (For a more in-depth history of FI bonds, check out A Brief History of the Financial Institution Bond by Robert J. Duke, published by the American Bar Association.)  Financial Institution Bond protection includes, but is not limited to, protection against:–  Fidelity providing coverage for loss from dishonest or fraudulent acts committed by an employee acting alone or in collusion with others.–  On premises loss which may result from robbery, burglary, misplacement or mysterious disappearance–  In Transit  from robbery, burglary, misplacement or mysterious disappearance while in transit while in the custody of a messenger or transportation company–  Counterfeit Currency for loss resulting from the receipt of any counterfeit money–  Forgery or Alteration covering losses from forgery of a financial instrument specified in the policy, such as losses of money, securities or other tangible properties –  Securities to cover loss resulting directly from a financial institution having accepted these in good faith, and given value, extended credit or assumed liability in return

For their loyal employees, customers and other stakeholders, financial institutions have a duty to put up an aggressive offense and strong defense in fighting crime within their own walls.  Fortunately, there is an array of proven internal controls, an abundant capacity of Financial Institution bond insurance in today’s market, and teams of honest, loyal employees that they can enlist to help.    About the AuthorGregory W. Bangs is the Chief Underwriting Officer of Global Crime at XL Catlin.  Over the last 30 years, he has been underwriting insurance and developing new products in the US, UK, Hong Kong and France. Greg can be reached at gregory.bangs@xlcatlin.com.