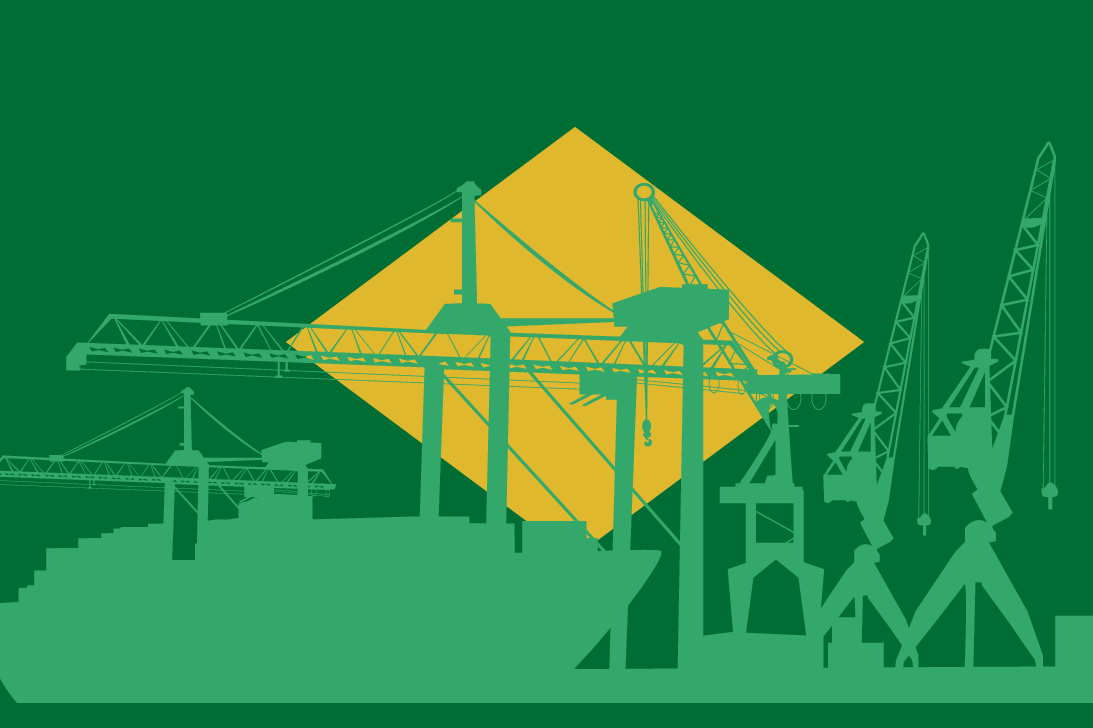 PORTS OF BRAZIL: Measures that drive the sector

The evolution of the port sector in Brazil is without a doubt linked to substantial social impact for regions where large complexes are being developed. Ports also have a significant impact in the economy of the environment in which they are established, giving rise to contributions related to infrastructure and logistics.

The ports and their operations play an important role in the logistics chain because they allow the transfer of cargo from one mode of sea transport (ship) to another mode of land transport (truck). As a multimodal transfer station, i.e. one that involves more than one or multiple modes of transportation, the concept of the Organized Port emerges: "State-owned assets that were constructed and equipped so as to meet demands such as navigation, passenger transit, or cargo handling and storage, and whose port activities and operations are under the jurisdiction of the port authority." (Source: ANTAQ).

Brazil is among the ten largest “port economies” in the world. There were 37 public ports, more than 191 private terminals, with around 1 billion tons of cargo handled in 2017, according to ANTAQ (the Brazilian National Waterway Transport Agency). The focus on productivity has resulted in growth in the size of vessels and the subsequent need to increase the depth of the access channels, specialized labor to handle loads of high complexity, and infrastructure and cutting-edge technology aimed at process efficiency.

From this perspective, the development of Brazilian ports marked by numerous bureaucratic obstacles is undergoing structural changes that cause an impact on the form of management, bringing investments in the expansion and modernization of the segment, thus meeting the growing demands of international trade. The uncertainties in the globalized economy, although they show constant alterations in the method of port management, still do not eliminate the complexity of the risks to be confronted by their operators. Insurance has the potential to contribute to this development and make it more sustainable.

Insurance has the potential to contribute to this development and make it more sustainable.

Step one: Identify the type of port that we are working on

We have the following definitions within the Port Secretary's sphere of competence:

Port facility: This is the facility located inside or outside the port, organized and used in passenger transit, in handling or storing goods, destined for or coming from waterway transport.

Private use terminal: This is the port facility operated by authorization and located outside the organized port area.

Cargo trans-shipment station: This is the port facility operated by authorization, located outside the organized port area and used exclusively for trans-shipment of goods in inland vessels or cabotage.

Step two: Analyze the purpose of the operation carried out

In carrying out its role in the logistics chain, the port was created in such a way that the complex itself generated its operational demand and did not depend exclusively on external demand, or in such a way that the greater interest is not to serve the industry, but the final consumer through regular shipping lines, and the handling and storage of third-party cargoes.

For risk analysis, defining the most diverse forms of responsibilities assumed by operators is paramount. It is important to correctly identify which service is carried out.

Handling of cargo and equipment:

Support for navigation, information and control:

Control of handling, docking and rigging

The role of insurance

It is within this context that the roles assumed by a Civil Liability insurance contractor of the Port Operator are identified, which may be the Port Authority or the Pier Service Administrator, the Port Facilitator and/or the Port Terminal. Marine insurance is intended to support such operators for the amounts for which they are responsible, and relate to the liabilities they may incur to third parties, depending on the role they perform. This is a comprehensive insurance policy, in which it is possible to contract different forms of insurance in one single policy. There is also protection coverage for direct physical damage to movable and immovable property used by the operator and loss of gross revenue of the insured party due to Physical Damage to Handling Equipment or Power Supply Interruption as well as Berth Blocking.

On the right track to becoming a worldwide reference

The Brazilian port sector has a long way to go to reach so-called “efficient logistics.” The Brazilian government has placed an increased focus on the development of policies and actions to improve logistics and productivity in the port sector. The Port of Vitória (ES), administered by Companhia Docas do Espírito Santo [Espírito Santo Docks Company] was the first public port to implement the Vessel Traffic Management Information System (VTMIS). This is a management support system that integrates different sensors to capture visual and electronic information in the port's information system to ensure greater efficiency and safety during vessel traffic and goods transport.

Considering that the implementation of the system is part of the Growth Acceleration Program (PAC), the idea is that, with the modernization and the transfer of port risks to an entity that supports economic growth (the insurer), assuming those risks that the port operator would normally have to bear, the Brazilian economy remains on track for growth; it is set to become a worldwide reference in Port complexes.

Cintia Takahashi is an Underwriter for XL Catlin’s Marine Insurance team. She is based in Sao Paulo, Brazil and specializes in Ports & Terminals. She can be reached at cintia.takahashi@xlcatlin.com
Subscribe