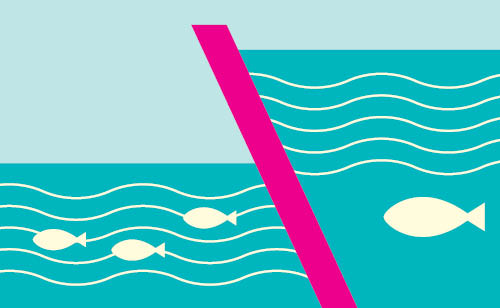 MOSE: Keeping the sea at bay

An “amphibious civilization” in a symbiotic relationship with natureThe natural environment and its elements, particularly water, have always shaped Venetian life, and vice-versa. In fact, some have characterized the Venetian people as an “amphibious civilization”. Venice’s history, identity and unique personality derive in large measure from the surrounding lagoon. The lagoon provided Venice with its initial raison d’être – refuge from invaders. The lagoon also insulated its citizens from the feudal squabbles common on the mainland, enabling Venice to thrive as a port and trading center. More recently, the lagoon has a new attribute: an increasingly serious threat.

The lagoon has served as a “moat”, and a central challenge for Venice has been keeping the water from disappearing altogether. Over the past five hundred years, major rivers flowing into the lagoon have been diverted to keep their sediments from filling in the water surrounding the city, many miles of artificial canals have been dug, the natural barriers separating the lagoon from the sea have been reworked, and deep ship canals have been dredged to allow big cargo and cruise ships to reach the port and industrial complex.

On 4 November 1966 water levels in the lagoon rose 194cm above normal levels. Priceless artworks were destroyed. Thousands of people were left homeless. The lagoon that defines Venice now menaces it. It’s clear that Venice’s urgent challenge is no longer keeping the water from disappearing; it’s keeping the water at bay.

The land sank, and the sea is rising

Water has always periodically invaded Venice. The acqua alta (literally “high water”) typically occurs in winter when high astronomical tides combine with siroccos (strong south-east winds pushing water toward the Venetian basin) and seiches (standing waves in an enclosed or semi-enclosed body of water, like the Adriatic Sea) to produce exceptionally high tides. Venetians have adapted to the unique challenges of living in a lagoon, and the city has developed a sophisticated and flexible system for dealing with acqua altas.

First and foremost, Venice’s tide monitoring and forecast center can predict tide levels with considerable precision. When an exceptionally high tide is imminent, sirens sound, warnings are issued over the web and mobile phone network, temporary elevated platforms are put in place, and some water transport lines are diverted. Residents know to use alternate routes, secure vulnerable items, and put on their boots. In two-and-a-half hours, the tide changes and the waters flow out. Normal routines return.

Unfortunately, exceptionally high tides are becoming more frequent and more pronounced. The reference point for measuring water levels in Venice is known as the “mareographic zero”. It was established at the Punta della Salute in 1897 based on the mean water level at that time. From 1940 – 1949, there were four tides greater than 120cm above mareographic zero. From 2000 – 2009, there were 20.

What’s driving this? In short, Venice sank, and the sea is rising. Today, mareographic zero is about 23cm below the surface of the water, meaning exceptionally high tides occur more frequently and inundate greater areas. Subsidence is responsible for about 12cm of this difference, and sea level rise for about 11cm.

The subsidence can be traced to industrial development in the Porto Marghera industrial zone in the 1950s and 1960s. Many new chemical, metallurgical, iron and glass plants were built there that required a lot of water for processing and cooling; all of the water was pumped from underground. After the 1996 flood, it was apparent that this was causing considerable subsidence in Venice, and the pumping was stopped. As a result, subsidence is not expected to be a major issue in the future.However, sea levels are projected to rise, perhaps substantially. The science indicates that the surface of the water in the city’s canals in 2100 will be anywhere from 70.5cm – 162cm higher than in 1897 when mareographic zero was established. The implications for Venice range from worrisome to dire. Even at the lower end of these projections, normal high tides would bring water into low-lying parts of the city, and in acqua altas, extensive areas of the city would be underwater.

MOSE: Engineering a solution to keep the water at bay

The 1966 flood was a wake-up call; city, regional and national authorities recognized that a definitive solution was needed to preserve Venice’s artistic and cultural heritage. After years and then decades of proposals and counter-proposals, the authorities ultimately settled in the early 1990s on a solution: a series of mobile barriers positioned across the three inlets to the Venetian lagoon. The project was christened MOSE, an acronym for Modulo Sperimentale Elettromeccanico, and a nod to the biblical figure Moses, who parted the Red Sea.

While MOSE has been beset with controversy and political infighting from the outset, it was ultimately launched in 2003. The final construction phase started recently, and the project is slated to be fully operational next year with a price tag of EUR 5.4 billion.

So how does it work? The basic idea is to create a barrier between the sea and the lagoon. This is done by placing 78 mobile steel gates across the three main inlets into the lagoon, the Lido, Malamocco and Chioggia inlets. When complete, the barriers will block water coming through those inlets to a level more than 2 meters above the water in the lagoon.

The gates are hollow. When they aren’t needed, the gates are filled with seawater and lie flush on the seabed. When a tide greater than 110cm is expected, compressed air is pumped in, the ballast water flows out, and the gates rise into position under their own buoyancy. The natural inclination of the gates is set at 45°, but the hinges built into the foundations provide some give to absorb waves, especially during strong storms.

Although the principle is fairly simple, the engineering challenges are considerable. The gates are 20m wide and 5m thick. The tallest ones are more than 30m long, the maximum depth of the inlets. That’s a lot of metal. The heaviest ones weigh close to 315 metric tons, about the same as a Boeing 747.

Their massive size notwithstanding, the gates can be raised in 30 minutes and lowered in 15. Closures are expected to last no more than 4-5 hours. During these periods, ships can move in and out of the lagoon via a series of locks.

Unlike other cities that have built similar barrier systems, MOSE is not automated; technicians will decide when to open and close the gates. While the gates are just starting to be placed in their foundations – building the 23,000 ton foundations and laying them precisely on the seabed was the hard part – technicians have been simulating the control of the gates since 2011. The data they have collected has enabled the creation of sophisticated models for predicting water levels with a high level of precision considering numerous variables. The lessons they have learned from these simulations are also being used to create the framework for deciding when to deploy the barriers.

Critics have raised concerns about the impact on the lagoon ecosystem from hindering the natural inflow and outflow of water. Proponents contend that since the barriers will be raised only occasionally and for only a few hours, the impacts should be negligible. Concerns have also been raised that sea levels will rise faster than projected, and the barrier will be obsolete much sooner than expected. Others note that the barrier offers up to two meters of protection; if this is not enough, it’s not just Venice that will be at risk.

Will it work? Venice is not the only place where surge barriers have been installed. When MOSE becomes operational, there will be nine major storm surge barriers in Europe including the Maeslant storm barrier protecting the port in Rotterdam and the Thames barrier protecting London. The other barrier systems have proven to be highly effective. Drawing on the knowledge acquired in designing, constructing, and operating these other systems, Venice has adopted a system of defense that is extremely efficient and functional.

Today, most commentators contend that Venice has never been in better shape. The canals are being dredged regularly to mitigate rising sea levels. Subsidence caused by pumping groundwater has stopped. And when the MOSE barrier is in place, Venice will be better protected than ever, and its residents will no longer need to keep their rubber boots close at hand.