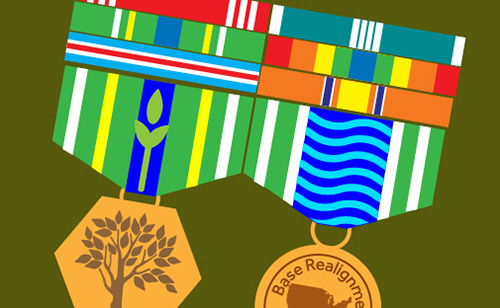 In June, the city of Alameda, California got bigger. The city regained control of 1,380 acres of bay-front land that it had formerly turned over to the US Navy -- for the purchase price of $1.00 -- in 1936 to create the Alameda Naval Air Station. The Naval base was created just in time for World War II and was the center of a lot of naval activity for more than 50 years. Recently, however, the base has been relatively quiet.

Alameda Naval Air Station was one of some 350 military bases in the US that have been closed or realigned as part of the Defense Base Closure and Realignment Act of 1988. The legislation established the Base Realignment and Closure Commission (BRAC) which aimed to save the US DoD money and in turn, the DoD wanted to return valuable land to local communities so that it could be put back to good use. There have been five BRAC rounds: 1989, 1991, 1993, 1995 and the most recent round of BRAC completed and entered into law in November 2005. Alameda was part of the 1995 BRAC closures.

While the television series MythBusters often conducts its more destructive experiments on the grounds of the station, the rest of the base has been relatively idle. As a result of the closure, the city lost 14,000 jobs and millions in tax revenue. For the last 16 years, the city has struggled to get the land back and come up with a plan to redevelop it. Unfortunately, it has seen two deals fall through with master developers, in part because of the real estate collapse and weak economic conditions. Now, in a strengthened economy, the city is ready to move forward, planning for homes, offices, shops, restaurants and 700 acres of parks and open space at the former military base. The new development would join the Department of Veterans Affairs' plans for a $2 million clinic, as well as federally protected habitat for the endangered California least tern and other species that have settled on the vacant land.

Across the country, many closed military bases have, or continue, to reinvent themselves, not as places for defense-related activity but as revitalized properties filled with housing, industrial, training, educational and recreational facilities and hubs of commercial business activity. For instance, anyone flying into Philadelphia International Airport will fly right over the former Philadelphia Naval Yard, once another very active US military base. In fact, it was the US’ first naval yard. Today, it’s something very different but no less active. The Navy Yard in Philadelphia is home to more than 130 companies and 10,000 employees in the office, industrial, manufacturing, and research and development sectors. The Philadelphia Naval Yard closed as part of the BRAC commission of 1991 and 1995.

Similarly, just 38-miles outside of Boston, is the former Fort Devens. Fort Devens is a 9,280 acre former military installation that served at the US Army’s New England headquarters for 79 years. It closed in 1996, eliminating 7,000 jobs in the area. Today, Devens is a 4,400-acre multi-use community with 87 businesses that employ more than 3600 people. Thirteen rail lines travel through Devens connecting it to the greater Boston area. And redevelopment plans continue.

Fort Devens and the Philadelphia Navy Yard are shining examples of how successful redevelopment can happen. Many communities, like the city of Alameda, are eagerly hoping to repeat that success. Despite an improved economy, there are still huddles to overcome but fortunately, wise risk management is proving to be an integral element driving success.

One of the biggest proven obstacles faced on former military bases is the existing environmental conditions on the property. Military bases – often self-contained communities themselves – have all the environmental issues that a city or municipality often handle. There are housing issues, motor vehicle maintenance facilities, fueling islands for a variety of military vehicles, laundry and dry cleaning facilities, mechanical and electrical equipment maintenance facilities and municipal-type waste dumps.

Under section 120 of the Comprehensive Environmental Response, Compensation and Liability Act (CERCLA), the DoD is required to be responsible for all remedial action necessary to protect human health and the environment that its activities have caused in the past. The intent of the CERCLA section was to insure that the closed or closing military installations would remediate to levels protective of human and ecological health before the property was transferred to the private sector.

Therefore, once the closure of a base is announced, a Local Redevelopment Authority (LRA) is formed and work begins on the environmental cleanup of the site and a Master Plan for the base’s future. The DoD prepares a Finding of Suitability to Transfer (FOST), and submits it for regulatory and public review. The FOST outlines the environmental condition of a property including whether a release or disposal of hazardous substances or petroleum products has occurred. The FOST contains a finding that the property is suitable for transfer by deed for the intended purpose and also documents any future use restrictions. After the FOST is signed, the military executes the actual real estate transactions that convey the property to the new owner. Developers then work with the LRA to help take the dreams laid out in the Master Plan and make them a reality.

Despite the DoD’s best efforts to clean up the property before transferring the land, there is often some hesitation because of the question of ongoing liability and uncertainty. In any redevelopment situation, there is typically ongoing concern about Additional contamination that may be discovered or the discovery of new contamination that even the military did not know about. In such cases, more remediation is required and additional expenses are incurred. Not to mention, while cleanup takes place, redevelopment activity or any other business already operating on a former base may halt while remediation takes place. There is also the chance that subsequent property owners might be named as co-defendants in lawsuits brought by third parties because of an environmental incident.

Regardless of these risks, the attractiveness of these development opportunities often can be enhanced and improved through the reduction of uncertainty and the addition of risk management controls. Communities certainly want to see redevelopment accomplished and have sought ways to address these issues and speed up the process. For instance, in an effort to expedite redevelopment activities, the DoD can prepare a Finding of Suitability for Early Transfer (FOSET). Such was the case in Alameda, California. The FOSET allows for the transfer of property without having completed all necessary cleanup actions. In such cases, the DoD may conduct cleanup actions, or the future landowner may conduct the cleanup actions, allowing more control over their reuse plans. At Alameda, Navy remediation crews will likely continue for years in the cleanup of industrial solvents, paint thinner, acids and other toxic chemicals used to repair airplanes. However, redevelopment activity can start in parcels of land deemed clean. This approach aims to get redevelopment plans moving along at a quicker pace and is an option that has grown more desirable for many communities who feel they can handle the cleanup effectively and efficiently.

• Pollution and Remediation Legal Liability (PARLL) policy provides coverage for on-site and off-site losses, remediation expense and legal defense expense under one policy for sudden and gradual pollution conditions at or from covered locations.
• Contractor’s Pollution Liability (CPL) coverage for liability due to pollution conditions arising from operations performed by or on behalf of the insured.
• Owner Controlled Wrap-up programs provide additional benefits, including cash flow management and cost savings that can be reinvested in the project.

Increasingly, environmental insurance and other innovative risk transfer mechanisms are playing a key role in returning these closed military sites – as well as other formerly used, often abandoned properties -- to productive community use. What is happening today on former military bases nationwide is clearly showing how the use of wise risk management tactics can keep big redevelopment dreams alive, with minimal delays and doubt.

The winter of 2020 is going to be unlike other winters before it. And if the rest of 2020 has shown us anything, it’s this: plan for the worst. According to the National Oceanographic and Atmospheric Administration (NOAA), the US should anticipate “warmer, drier conditions across the southern tier
Read More

What Lies Beneath: The slippery consequences of non-stick chemicals

In early November 2020, the New Jersey state Attorney General’s Office and the Environmental Protection Agency filed suit against three companies for both historic and alleged ongoing chemical releases into the state’s drinking water supply. After what the suit claims is decades of contamination of
Read More