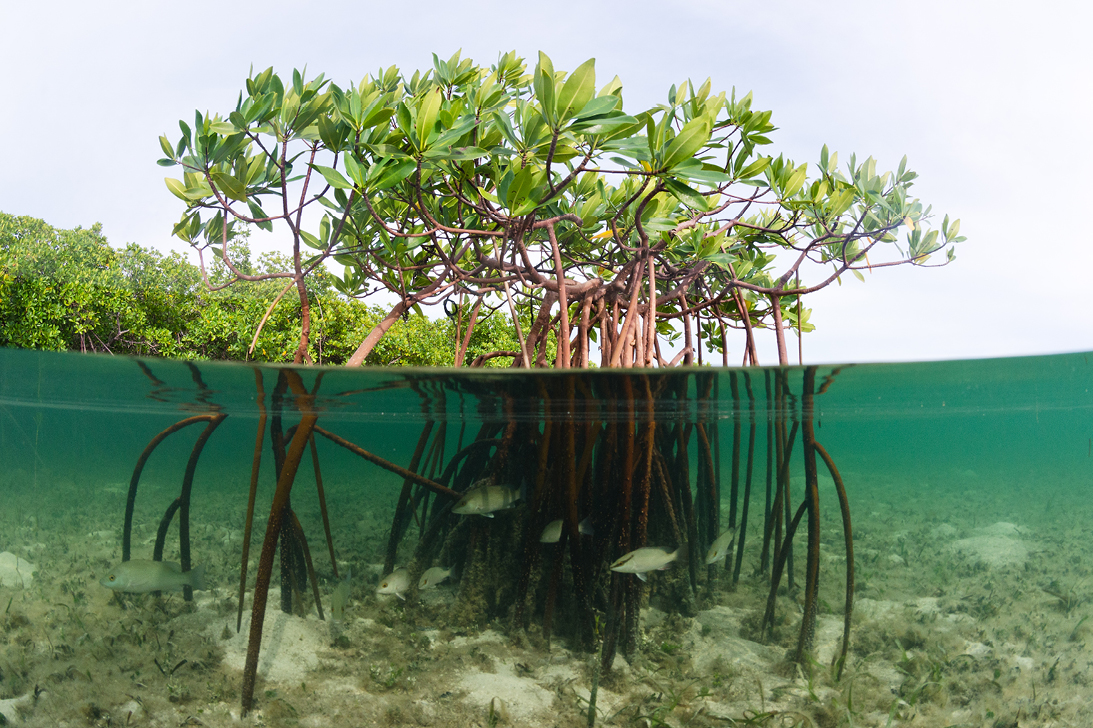 Mangrove insurance - opportunities to build resilience in the Caribbean

Last week, The Nature Conservancy and University of California, Santa Cruz published a report entitled Reducing Risk through Mangrove Protection & Restoration: Opportunities for Cost-effective Investment and Insurance in the Caribbean Region, with support from AXA XL. Fast Fast Forward talked with Dr. Michael W. Beck and Chip Cunliffe about the role mangrove forests play in safeguarding coastal areas and how insurance could cost-effectively help protect and restore these uniquely valuable ecosystems across the Caribbean region.

Dr. Beck is a Research Professor at the University of California, Santa Cruz and was the report's co-lead author.

What was the aim of this research and what did it encompass?

Dr. Michael Beck (MB): In recent years, my research has focussed on the role of mangroves and coral reefs in reducing waves and storm surge and in limiting coastal flooding and erosion. We also examine how global climate change is intensifying these threats to low-lying coastal areas around the world.

Our work has shown that mangroves protect 15 million people from flooding and reduce flood damages by USD 65 billion every year. The first 100 meters of mangroves forests can be particularly critical, for instance, by lowering wave heights by as much as 66%.

Building on these prior quantitative studies on the risk-reduction benefits of mangrove forests, we conducted a benefit-cost analysis across the entire Caribbean region, including Florida, to identify where cost-effective opportunities may exist for mangrove restoration. Finally, based on these benefit-cost analyses, we carried out a high-level market assessment of different countries' capabilities for insuring these valuable natural assets.

Chip Cunliffe (CC): The report Mike and the team developed represents a specific, tangible example of how multidisciplinary approaches involving experts—here, for instance, in marine ecosystems, risk modelling, insurance and finance—can produce the evidence needed to create cost-effective solutions for building resilience. In this case, they identified the Caribbean mangroves that most warrant insurance protection given their value in protecting coastal communities and infrastructure and the cost to restore these ecosystems after a storm.

I would also note that insuring natural assets—such as mangrove forests—due to their value to coastal communities is a relatively new concept.

With leadership from The Nature Conservancy, the government in Quintana Roo, Mexico, has enacted a programme for insuring coral reefs along parts of the "Mexican Riviera". This new report builds on the emerging and pioneering development of insurance and finance products to help protect and conserve coastal ecosystems. (A Fast Fast Forward article describing the programme in Quintana Roo is here.)

Before we delve into some of the report's findings, could you describe why mangroves are so important?

MB: Mangroves really are quite unique. They are the only trees that tolerate saltwater. They live in more than 100 countries and can grow quickly (like weeds) with their "knees" partly to fully submerged in saltwater. They can form dense thickets even in urban settings if they are given half a chance.

Ocean managers and conservationists have more experience restoring mangroves than any other coastal habitat. They have successfully restored hundreds of thousands of hectares in countries across the world including the Philippines, Vietnam, Australia, the U.S. and across the Caribbean. Some hard lessons have been learned along the way that can be summarized as: Don't plant mangroves species where they did not previously grow.

What is the current status of mangroves around the world?

CC: As the report notes, mangroves are threatened by a number of different factors, both natural and human-made. High winds from intense storms, can damage or kill mangrove trees. Likewise, the growth of coastal aquaculture, poor development choices, timber harvesting, and pollution runoff have all been linked to mangrove forest degradation or destruction.

Mangrove forests currently cover approximately 14 million hectares across 118 countries around the world. This coverage, however, is drastically smaller than what it once was; between 1980 and 2005 about 20% of mangrove forests were lost globally and the overall historical loss is probably 50% or more. Fortunately, the rate has slowed substantially in the last two decades, but finding ways to restore historical losses and slow or reverse any new loss is critical because mangrove forests provide a suite of important ecosystem services.

How did you quantify the likely benefit-cost ratios associated with protecting and restoring mangroves in different parts of the Caribbean?

MB: While we increasingly understand the flood reduction benefits, what is less well understood is where mangrove management and restoration can yield the highest returns on investment. That, in a nutshell, was the basis for preparing this report.

I'll skip the details on how we assembled mammoth datasets and ran several thousand simulations showing likely flood damages (impact) along with avoided damages (mangrove benefits). In brief, we coupled probabilistic assessments of offshore storm conditions with coastal flood models to measure the flooding that would occur, both with and without mangroves, for all 700,000 km of mangrove coastline around the world. Then, by adding population and land use data, we estimated the averted flood damages to people and property. Hence, we calculated the expected benefits of mangroves in social (number of people protected) and economic terms (value of property protected).

These efforts represent a state-of-the-art assessment of flood risk and mangrove benefits. And for many countries, this study provides the best national-level estimate of flood risk. This will help interested organizations, including national/local governments, conservation groups, re/insurers and investors, to better assess coastal flood risk in areas where mangrove forests are part of the natural environment.

We combined these modelled benefits with estimated restoration costs from more than 72 projects to develop explicit benefit-cost ratios for individual 20-kilometre study units. In our review, we found (not surprisingly) that restoration costs were higher in the U.S. (USD 45,000 per hectare in Florida) than in the rest of the Caribbean (USD 23,000 per hectare).

(Our paper describing these storm and flood models in detail can be found here.)

What did the report conclude about the feasibility of mangrove insurance as a mechanism for cost-effectively protecting and restoring mangrove habitats?

CC: The report found 20 territories and countries in the Caribbean with sections of coastline (more than 3,000 km in total) where mangrove restoration benefits significantly outweigh the costs.

However, the market for mangrove insurance will largely depend on the assets covered by the policies: public infrastructure such as ports, schools and water treatment facilities, and/or residential and commercial buildings. That means, in turn, that the funding source(s) and beneficiaries of the programme will significantly influence how a mangrove insurance scheme is structured.

The report also found that although the U.S. and the Bahamas have the most robust insurance markets, mangrove forests' protective benefits are also very significant in the Dominican Republic and Jamaica due to their high population densities.

Did the report make any recommendations about how to best structure a mangrove insurance coverage?

CC: The report looked at the feasibility of parametric or index-based approaches, traditional indemnity insurance, and a hybrid structure combining elements of both. It didn't conclude that any one of these three options is best as each has plusses and minuses.

One of the primary benefits of parametric insurance is that payouts can be made quickly once agreed threshold values from objective, third-party sources are exceeded; on-the-ground damage assessments aren't needed. With this approach, the threshold level(s) triggering a payout would be derived from location-specific models showing the relationship between wind speed and/or storm surge and damages to mangrove forests; such models are currently in development.

The report also found that traditional indemnity insurance could be used with payouts made after a post-disaster damage assessment. One advantage of this option is that it eliminates basis risk; that is, the possibility (as under an area-wide parametric programme) of payouts being made even when the damages are slight to non-existent, or vice-versa.

Alternatively, a combined parametric-indemnity insurance product could be created where some of the funds are released immediately post-storm through the parametric portion, and the remaining payouts made after on-site damage assessments.

What are the next steps?

MB: The next step is to undertake a full feasibility study, including detailed analyses on the relationship between wind speed and mangrove damage. Further work is also planned to confirm the costs for maintaining and restoring mangrove forests in different countries and areas; this cost element obviously is a critical variable in setting threshold levels and policy limits. Finally, specific locations where mangrove insurance products would be most viable will be identified in consultation with local stakeholders.

The full report can be accessed here.

Dr. Michael W. Beck is a Research Professor at the University of California Santa Cruz and the head of the Coastal Resilience Lab. Mike works on marine conservation across science, business and policy to bring effective tools and clear results to decision-makers. He can be contacted at mwbeck@ucsc.edu

Chip Cunliffe is AXA XL's Director of Sustainable Development. Chip established and manages AXA XL's Ocean Risk Initiative which works to identify innovative insurance and finance solutions to minimize and mitigate the impacts and implications of ocean-related risk. In 2012, he launched AXA's Ocean Education program. Chip is based in London and can be reached at chip.cunliffe@axaxl.com