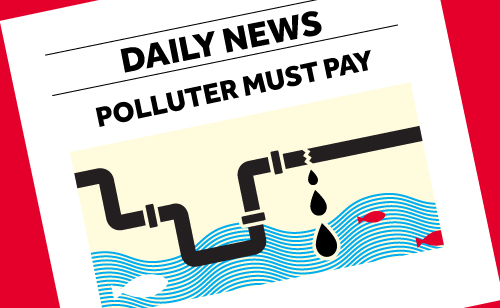 Keeping out of the Headlines

Each year, the UK’s Environment Agency (EA) receives reports of around 22,000 pollution incidents. That equates to more than 60 per day. Often the cause is a loss of control or a breakdown in procedures.

Data gathered by XL Catlin’s environmental team found that pollution incidents occur most in varied small industries. Light industries such as farms and manufacturing businesses are at risk, but so are healthcare, recreational sports, education and research facilities - industries that most would never associate with pollution. Even the average homeowner can cause pollution - data from the EA noted that in 2013 there were 1400 home oil tank pollution incidents. In short, even the most improbable can find themselves at risk, from small office blocks to global corporations.

While pollution incidents are closely monitored by the EA, the media also report incidents.

Hold the Front Page!'Water Company pumped raw sewage into the River Ouse’ reads one headline, while another reads: ‘University waste leak pollutes nearby rivers’. It doesn’t take much to envisage the knock on effect this could have on an organisation’s reputation and in turn, its profitability. Both these examples captured the attention of the national media, being reported by the BBC’s online news platform. Based on 2012 findings, the platform saw over 2 billion page views every month.

But these incidents aren’t rare. In 2014 alone XL Catlin noted over 300 incidents of polluters making the news in the UK and the total number of incidents is likely to be far in excess of this.

Social media is another factor worthy of consideration. Its widespread uptake means news can spread like wildfire.

The misconception that the current general insurance policy already covers companies in the event of a pollution incident, is still the general view held by the vast majority of businesses, but this is often far from the truth. We consider that a significant proportion of organisations that experience an incident don’t have the correct insurance cover or an adequate contingency plan, if any plan at all.

A company’s effectiveness in responding to a pollution incident is crucial. A good contingency plan means pollution can be dealt with swiftly, minimising the financial damages and related media fallout. Those that get caught off guard run the risk of snowballing media coverage if they fail to respond effectively - containing the incident fast is key to starting things on the right foot. To take a few real life examples, ‘Farmer responsible vows to pay for clean-up’ is a much more favourable headline than ‘Men jailed and £200,000 seized for waste crime’.

While jail sentences are rare comparative to the total amount of incidents that occur, they are probably more common than you think. And when the court reporter decides to cover the story, it can be severely damaging. Reports can spread from one publication to the next and before long a company’s name has become synonymous with the incident at hand.

So how does a business keep out of the papers?

Obviously the best way to avoid appearing in the headlines as a polluter is to do everything possible to prevent an incident from happening in the first place. But accidents do happen – Environment Agency research shows that 42% of UK-based incidents occur due to failure of equipment or controls. However, there are resources out there that can help.

The EA website has a host of information on the topic. This is designed to inform businesses of the best protocols and equipment available to ensure the company is utilising best practices. The savvy business leader will keep up to date on new developments and procedures that help protect an organisation.

The first step should always be calling the appropriate authorities - namely, the EA. Environmental insurance providers should also be notified, as they will know how to respond effectively.

Good environmental insurance providers will have specialists in pollution on hand to contribute expert knowledge and experience in the field. The EA are very good at helping, but they won’t be as concerned with a business’ reputation, which is why it’s best to consult an expert to help contain the incident as quickly and efficiently as possible.

Want to know more? You can reach Simon on: simon.white@xlcatlin.com