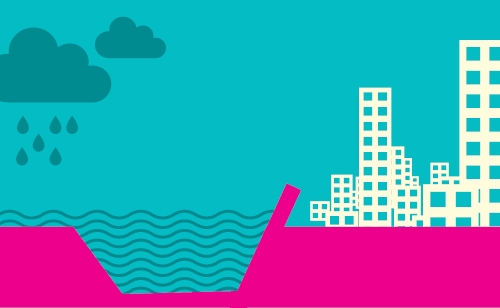 Is the EU better positioned to manage floods?

Europe’s rivers have a rich historical, cultural and economic significance. They serve as boundaries. They provide water for cities, industries and agriculture. They are avenues for transport. They have been celebrated in song and prose.

And sometimes they flood.

In May and June, 2013, central Europe was hit with severe flooding. In the Bavarian town of Passau, where three rivers come together, water levels reached heights last seen 500 years ago. This flood claimed 25 lives, and was the year’s most expensive loss event. Germany was especially hard hit with economic losses of EUR 10 billion and insured losses of EUR 2.4 billion.

And as the climate warms, damages from floods are expected to increase. From 2000 to 2013, floods in Europe resulted in damages averaging EUR 5.5 billion annually. New research suggests this figure could increase by as much as fivefold by 2050 without a multi-pronged effort to prevent floods and minimize their impacts.

A comprehensive and holistic approach

Although the 2013 flood caused extensive damage, this is not the first time Europe has experienced catastrophic flooding in recent years. Record rains in Central Europe in August 2002 led to widespread flooding on the Danube and Elbe rivers; the gauge level on the Elbe in Dresden was at its highest level since 1275. The Danube was hit by severe flooding again in 2005. These events led the European Union (EU) to establish policies and programs focused on flood prevention and mitigation. What has emerged at the EU level is a comprehensive and holistic approach comprising four main components: prevention, preparedness, crisis response and recovery.

The prevention component is centred on the EU Floods Directive (DIR 2007/60/EC) adopted by the European Commission in 2007. The Directive aims to reduce and manage the risk of floods through a three-step process. Countries are first required to assess their river basins and coastal areas for flood risk. Based on the findings of these assessments, countries are required in the second step to develop detailed flood risk maps for areas subject to flooding, including details on flood extent, depth and level under high, medium and low probability scenarios. In the third step, countries must establish flood risk management plans addressing prevention, protection and preparedness. The assessment phase was completed in 2011, the mapping requirement was met in 2013, and the management plans are to be completed this year.

Disaster response is primarily managed at the local, regional and national levels. However, when a major disaster occurs, a fast, coordinated response can help limit the severity of the damages, and make for a more efficient recovery effort. The Emergency Response Coordination Centre (ERCC) was established to coordinate responses to natural and man-made disasters, including floods, both inside and outside Europe. The ERCC acts as a coordination hub during major disasters, and works to ensure a timely and efficient response.

In addition to coordinating response efforts, the ERCC helps countries pool resources that can be deployed when a major disaster occurs. It also promotes sharing best practices in disaster management, and conducts investigations after significant events to capture lessons learned.

The European Union Solidarity Fund (EUSF) was established in 2002 to provide assistance to member states when major disasters, including floods, occur. The threshold for providing assistance is when the estimated direct cost of damage is more than EUR 3 billion, or 0.6% of the country’s GDP. The EUSF is intended to supplement the affected country’s own expenditures, and focuses on critical emergency measures like restoring essential infrastructure, providing temporary accommodations for displaced people, and protecting culturally significant sites and artefacts. The EUSF considers damages to private property as well as losses in income as insurable, and thus these are not covered by the Fund.

Communication and coordination are critical

All activities related to floods – from prevention through recovery – involve a shifting array of public agencies and private sector stakeholders. This is especially the case with major river systems that traverse more than one country. As a result, communication and coordination play a critical role in preventing flooding and limiting the damages.

The structures the EU has developed have the potential to minimize the likelihood and impact of flooding. However, these structures represent a top-down approach that is being applied across multiple countries with different geographies, national and local authorities responsible for disaster planning and crisis response, and attitudes regarding land use planning and zoning.

For example, a recent report from the STAR-FLOOD[2] project concluded “… the relative influence attributed to the Floods Directive differs tremendously between countries. In Poland, for instance, there is some evidence that the Floods Directive implementation legitimised innovative policies and legislations. In the Netherlands, on the other hand, although some policymakers welcome the flood hazard and flood risk maps, in general the Floods Directive implementation is viewed as a bureaucratic exercise: it is more seen as a formalisation of ‘business as usual’ than as an opportunity to improve flood risk governance.”

In addition, without bottom-up buy-in and coordination, the benefits stemming from the EU structures are likely to be fragmented and lessened. For example, in the 2013 floods, EFAS sent out initial warnings eight days before the flooding starting, and progressively stronger and more detailed alerts in the following days. However, it is not apparent that authorities in the affected areas were aware of this information or used it to help organize their responses.

Unfortunately, the next major European flood is likely to happen sooner rather than later, and more frequent and intense storms are predicted.

However, the structures developed by the EU, while still somewhat immature, have established a basis for better prevention, preparedness, crisis response and recovery. The lessons learned from previous floods offer clear evidence of the effectiveness of different approaches, especially structural remedies, to minimize and mitigate flooding. These and other developments provide some cause for optimism that Europe will be better positioned to absorb the impacts from the next big flood, and even more so for the one after that.

What your company can do to minimize and mitigate flood risks

While these governmental efforts should help, there is also much that individual companies with operations in Europe can do to minimize and mitigate flood risks.

The first step is to assess the exposure. The European Environment Agency has aggregated the detailed flood risk maps countries were required to develop under the EU Flood Directive, and published a scalable map showing areas with potentially significant flood risks. In many cases, municipal / regional planning departments will have even more detailed information. Your insurer’s risk engineers can also help assess your flood risks, including what locations are potentially subject to flooding, and under what circumstances.

If your company has significant flood exposures, it should play an active role in developing / refining the local and/or regional flood management plans affecting your facilities. Understand what is being proposed, and how these plans could impact your company. Add your input. Also, as the 2013 floods indicated, not all local / regional authorities are taking full advantage of the European Flood Awareness System and other EU-level resources. Check to see if the authorities in your area are aware of these capabilities and have incorporated them into their response plans.

And plan ahead. If your company has locations subject to flooding, it is almost certainly a question of when, not if a flood will occur. While the response plans will vary depending on the occupancy, location and other factors, you should assume that critical infrastructure will be damaged if not destroyed, and that pumps, generators and similar materials will be difficult if not impossible to procure. As a result, your company might want to consider pre-positioning the supplies it will need to respond to severe flooding. Developing a response plan, including possible structural remedies aimed at reducing the impact of flooding at specific locations, is also an area where risk engineers can provide support.

Finally, you should consider the potential financial impacts of a severe flood. This includes both the direct costs stemming from physical damages as well as the potential short- and long-term financial impacts associated with lost revenues and damaged customer relationships. Your broker can help determine whether risk transfer is a viable solution, and if so, the most cost-effective approach for structuring the program.

[1] Ensemble forecasting is a form of Monte Carlo analysis designed to predict the behaviour of a dynamic system; in this case, river basins.[2] STAR-FLOOD is a project funded by the EU that is “… focused on analyzing, explaining, evaluating, and designing policies to better deal with flood risks from rivers in urban agglomerations across Europe.”