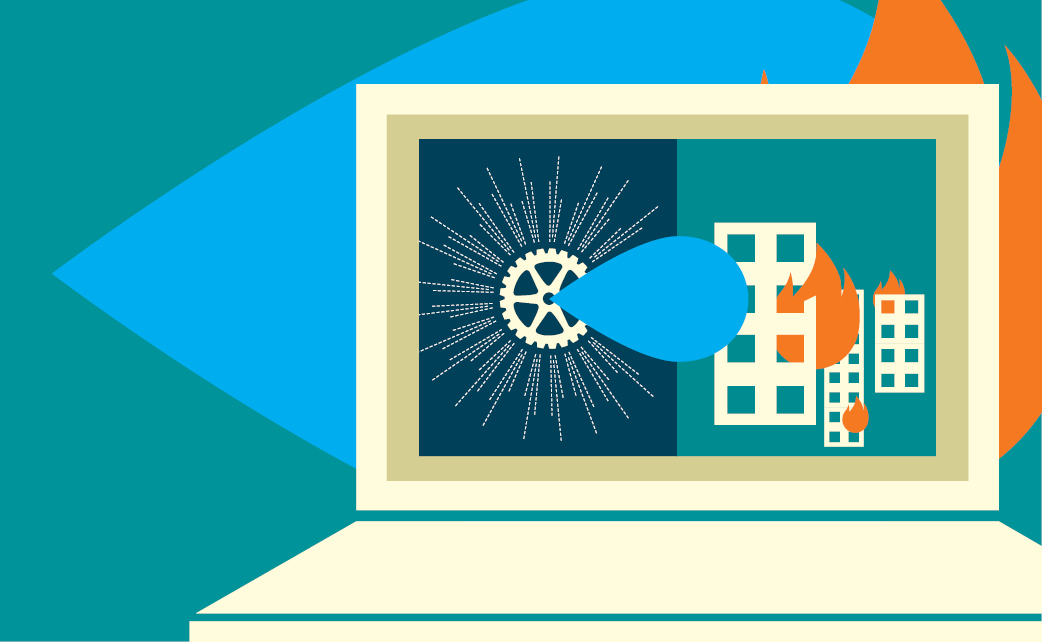 Fire simulation: an innovative approach to saving your business money

Warehouse fires: fast and hotIt’s the middle of the night and a fire suddenly breaks out in a warehouse in an industrial area west of Sydney. In the few minutes it takes firefighters to reach the site, the fire has already spread throughout the structure. At this point, the danger of a wall or building collapse is high, so the firefighters cannot enter the building. Although the firefighters prevent the fire from spreading to a neighboring paper recycling plant – and no one is injured – the warehouse and its contents are a complete loss.Warehouse fires are especially pernicious. Warehouses are typically large undivided spaces with high ceilings. Once a fire starts in a warehouse, it usually ramps up quickly, and it is often too dangerous for firefighters to fight the fire inside the building. Compared to other occupancies, warehouse fires have lower injury and fatality rates, but property losses per fire are typically much greater. And in addition to the direct losses from the fire, companies could be liable for damages to nearby properties plus environmental clean-up costs. Business interruption expenses are also common.But there’s another scenario: Again a fire suddenly breaks out in a warehouse on the outskirts of Sydney. In this case, however, within five minutes the heat triggers the Early Suppression, Fast Response (ESFR) system. The system’s sprinklers are activated, and within 15 minutes the fire is mostly contained; firefighters safely enter the building and extinguish it completely. Property damage from fire, smoke and water is minor. A tragedy is averted.Automatic sprinkler systems are a proven solutionAutomatic sprinkler systems have been in use for almost 150 years and their uses and benefits are well documented. For example, automated sprinklers discharge up to 15 times less water than fire hoses; less water damage helps minimize property losses, and promotes a faster return to business as usual. Moreover, fires in sprinklered buildings tend to cost 80% less than equivalent fires in non-sprinklered buildings.However, ESFR systems are not a “one size fits all” solution. There are many different types of systems, and the design, construction and contents of warehouses vary greatly. So the challenge many companies face is ensuring the effectiveness of the fire suppression system given a number of variables.Burn it down or write some code?Design and installation rules for sprinkler systems are delineated in a number of codes – see especially NFPA 13 and FM data sheets 8-9. While these codes are very useful, they come with strict design parameters and installation rules. Challenges arise when the building and storage parameters don’t conform to the codes, and/or the installation rules can’t be followed. In these cases, full-scale testing can be used to assess the impact of the deviations. Up to now, that meant building a scale model of the structure, filling it with representative contents, and burning it down.We believe there is a better alternative. In short, XL Catlin creates a computer model of the structure, then starts a fire, over and over again – virtually – based on different variables.This innovative approach offers considerable versatility and is highly cost-effective. Once we’ve developed a base computer model, it’s relatively simple to modify one or two variables, re-run the simulation, and assess the impacts. Computer simulations are also much less expensive than physical tests which can cost upwards of USD 200,000, and still only cover a single configuration.The variables we model typically fall into one of three categories. First there is the structure including its volume, ceiling height and slope of the roof, and the number and placement of vents. Another set of variables has to do with the fire itself: where does it start; how quickly does it ramp up; and how big can it become. Finally, there are many options when it comes to the suppression system such as the type of sprinkler head plus the number and spacing of the sprinklers in the building.

All of these can influence the extent of damage the fire causes, or conversely, the effectiveness of the system in suppressing the fire.
For example, a hot topic in the industry – no pun intended – has to do with heat and smoke venting systems. Effectively, a vent opens up after a fire starts, and all the heat and smoke rushes to this vent. However, directing the heat and smoke toward the vents can delay the operation of the sprinklers, and in some cases, significantly undermine their effectiveness.We’ve run models to show how sprinkler operation time can be delayed by heat and smoke vents. But since vents are currently mandated in many countries for life safety reasons, we can also revise the models to show how varying the size and/or placement of the vents will minimize if not eliminate this possibility.Modeling can also be used in conjunction with a full-scale test. With this approach, the modeling effort is first done to identify the variables and arrangement that will provide the greatest challenge for fire control. Then, a full-scale test is conducted based on the most challenging scenario. A successful test based on variables identified from a modeling effort is truly indicative of adequate design.A versatile and cost-effective approachWe believe this innovative approach to modeling fire suppression systems offers significant benefits to warehouse owners. Although the codes cover approved sprinkler designs and installation guidelines, warehouse owners often have to make unavoidable deviations from the rules. In these situations, we need to investigate if these are tolerable – or not – and get an idea if the sprinkler system will still be able to control a fire. With modeling, we can inexpensively explore the impact of various deviations.While modeling is not expected to supplant full-scale tests – best practice codes will continue to be based on arrangements that have been validated in real fire tests – computer simulations can help instil confidence that a system design and configuration that deviates from the codes will quickly detect and suppress a fire, and without the added costs and inflexibility of a physical test. In addition, the results of the modeling help our underwriters to more precisely estimate probable losses, which, in turn, means the client’s risk transfer program can more closely match the potential risk.

Want to know more? You can reach Rick at: richard.lascelles@xlcatlin.com