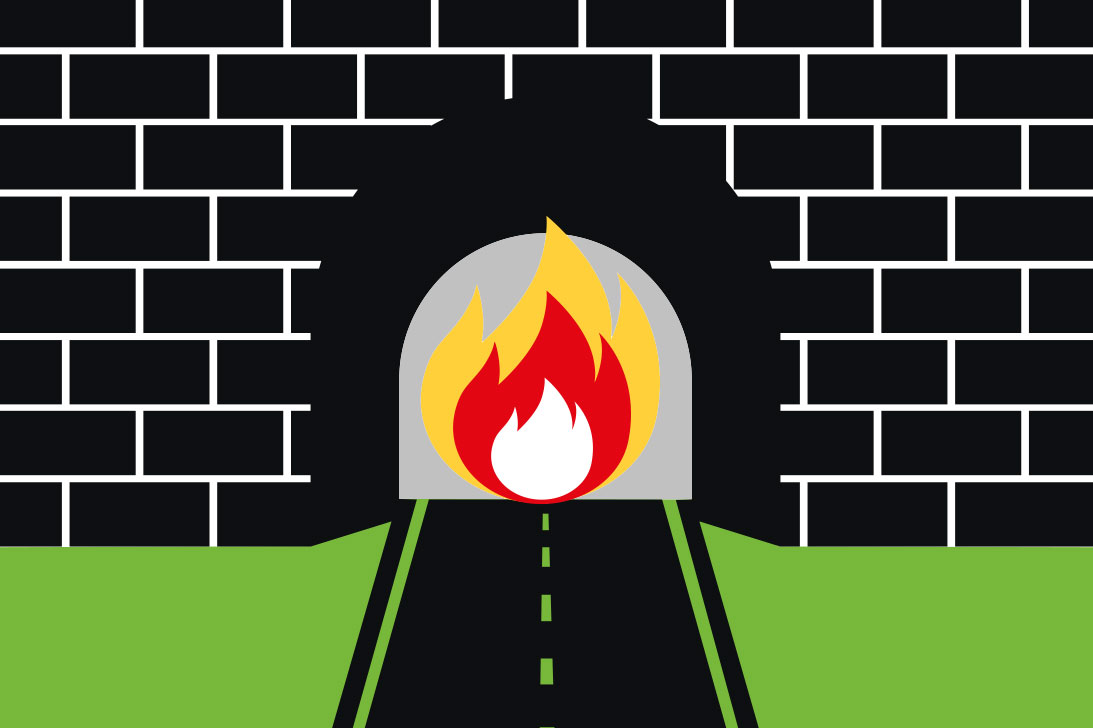 Fire in the Hole!

Promoting year-round trade and mobility across Europe – from north to south and east to west – has historically been challenged by the imposing reality of the Alps. For Switzerland and Austria, as well as Germany, France and Italy, the solution has been to punch holes through the mountains.Today, Europe has about 700 traffic tunnels longer than one kilometer; eight of these exceed ten kilometers. In Switzerland, every ninth kilometer of the national road network is through a tunnel.The stuff of nightmaresThe increasingly dense network of Alpine tunnels has certainly had a positive impact on economic growth and mobility across the region.Tunnels are also unique environments with particular safety risks.In March 1999, a truck carrying flour and margarine caught fire about midway through the 11.6 km Mont Blanc tunnel connecting Italy and France. The fire burned for 50 hours. Tragically, 39 people, including the commanding officer of one of the fire brigades, lost their lives. The fire also destroyed 100 vehicles, and it took three years to repair the damage and install enhanced safety measures.A few months later, a truck slammed into vehicles waiting at a traffic signal in the Tauern Road tunnel in Austria; eight people were killed in the collision and another four died in the fire that followed. And in October 2001, a fire in the St. Gotthard tunnel in Switzerland claimed 11 lives after two trucks collided head-on.Fed initially by oxygen from air venting systems, tunnel fires can grow rapidly from a small spark. Vehicles tightly confined in an enclosed space offer an abundant fuel source considering their petrol, tires and contents; the margarine in the truck that caught fire in the Mont Blanc tunnel, for example, was the fuel equivalent of 23 thousand liters of oil. The resulting dense smoke can make it difficult for people caught inside to find their way to safety, especially if the wiring for the lighting system has melted plunging the shaft into darkness.

The solutions must be simple. Otherwise, they don&rsquo;t work under the conditions of a dangerous situation.

Carbon monoxide and other toxic gasses can fast reach harmful levels. In the Mont Blanc fire, the venting system drove noxious smoke down the tunnel faster than people could flee. As these fumes displaced the oxygen, vehicle engines started to stall. Firefighters in the first two fire trucks responding to the disaster were forced to abandon their rigs and take refuge in emergency fire cubicles.Tunnel fires also present many unique challenges for firefighters; the conditions inside the tunnel can be extremely hazardous, and they often have to travel long distances to put out the fire and evacuate injured people.Safer environmentsAs tragic as they were, many valuable lessons were learned from the Mont Blanc, Tauern Road and St. Gotthard fires.Tunnels used to have longitudinal ventilation which meant that smoke from a fire was pushed through the tube to one of the portals. In the St. Gotthard incident, for instance, many kilometers on the “downwind” side of the fire filled with smoke. That made it extremely dangerous for people caught on that side of the fire as well as the fire brigades entering the tunnel through the downwind portal.In response, many tunnels were retrofitted with powerful exhaust systems that can quickly expel smoke and toxic gasses from the shaft into the ventilation system. Smaller evacuation and rescue tunnels parallel to the main tube were also added in some of the longer tunnels in Switzerland, Austria and Germany.With these improvements, smoke from a fire can’t spread widely through the tunnel, people caught inside have a better possibility of escape and firefighters can approach the fire more quickly and safely.Realistic trainingIn the aftermath of the Mont Blanc and Tauern Road fires, a task force created by the Swiss Federal Road Office (FEDRO) recommended that a dedicated facility be established to conduct research on the best tactics and tools for fighting tunnel fires, and to train firefighters under realistic conditions. This recommendation took on added urgency after the St. Gotthard fire in 2001.FEDRO and the Swiss Federal Railways (SBB) subsequently provided funding for the International Fire Academy (IFA), a research lab and training center focused on tunnel fires. The IFA constructed two specialized facilities in Switzerland – in Baltshal, near Basel, and in Lungern, near Lucerne – with more than 1,500 meters of tunnel; the longest segment is 600 meters.A wide range of fire scenarios can be created at these facilities using full-scale replicas including numerous vehicles – cars, trucks, buses and delivery vans – as well as passenger railway and freight cars. As the IFA’s website notes, “… all conceivable deployment situations and assignments can be simulated ….”There is even a two-level mock-up of a car park; that’s especially relevant since fires in parking garages occur more frequently than fires in road or rail tunnels.The result is a unique and highly authentic training experience. Today, more than 3,000 firefighters annually take part in one- to four-day courses where they rehearse a variety of fire and rescue deployments.“Extinguish to rescue”These facilities also serve as a laboratory for determining the most effective approaches for fighting tunnel fires.According to Christian Brauner, the IFA’s Head of Development, “When a fire breaks out in a tunnel, most people today will be able to escape on their own, especially with the engineering improvements that have been made. But there will always be some people who can’t get out; maybe they’re elderly or disabled or disoriented by the confusion that always surrounds emergency situations. Fifteen years ago, fire services could not have rescued those people. Today, they can.”Smoke presents the biggest danger in a tunnel fire. When smoke fills the shaft, the risk of injury or death to people in the tunnel is significantly greater, and search and rescue operations are much harder, slower and riskier. So the faster the fire can be extinguished and the smoke cleared, the quicker rescuers can bring injured, disabled or disoriented people to safety.Brauner says, “In building fires, firefighters first rescue the people then work to put out the fire. In tunnels, it’s the opposite; you put out the fire then do search and rescue.” He adds, “We call it ‘extinguish to rescue.’”Brauner also says the simulations conducted at its facilities along with extensive collaboration with fire brigades throughout Europe have shown that two simple tools can be highly useful in tunnel fires. “First, we use search sticks similar to the canes blind people use. Without them, a firefighter needs a lot of time, and it’s very physically demanding. With search sticks, they can stand upright and search extremely quickly. The second is to use portable stretchers with wheels so that a firefighter doesn’t have to drag an injured person a long way on the ground. That’s both very strenuous for the firefighter and can cause even greater injuries to the victim.”Brauner adds, “The solutions must be simple. Otherwise, they don’t work under the conditions of a dangerous situation.”The likelihood of an accident in a tunnel has not diminished over the past 15 years; increased traffic volumes and more distracted drivers are the main culprits. The risk of a devasting accident with significant fatalities, however, has decreased considerably. Most tunnels have been retrofitted with exhaust fans to vent the smoke quickly, and rescue tubes have been added to make it easier for people to escape and firefighters to approach. And thanks to the IFA, firefighters tasked with responding to tunnel fires today have better tactics, training and tools to help them react swiftly and authoritatively.Sources:http://www.ifa-swiss.ch/en/ifa-uva.htmlhttp://www.fireengineering.com/articles/print/volume-169/issue-4/features/tunnel-firefighting-operations.html