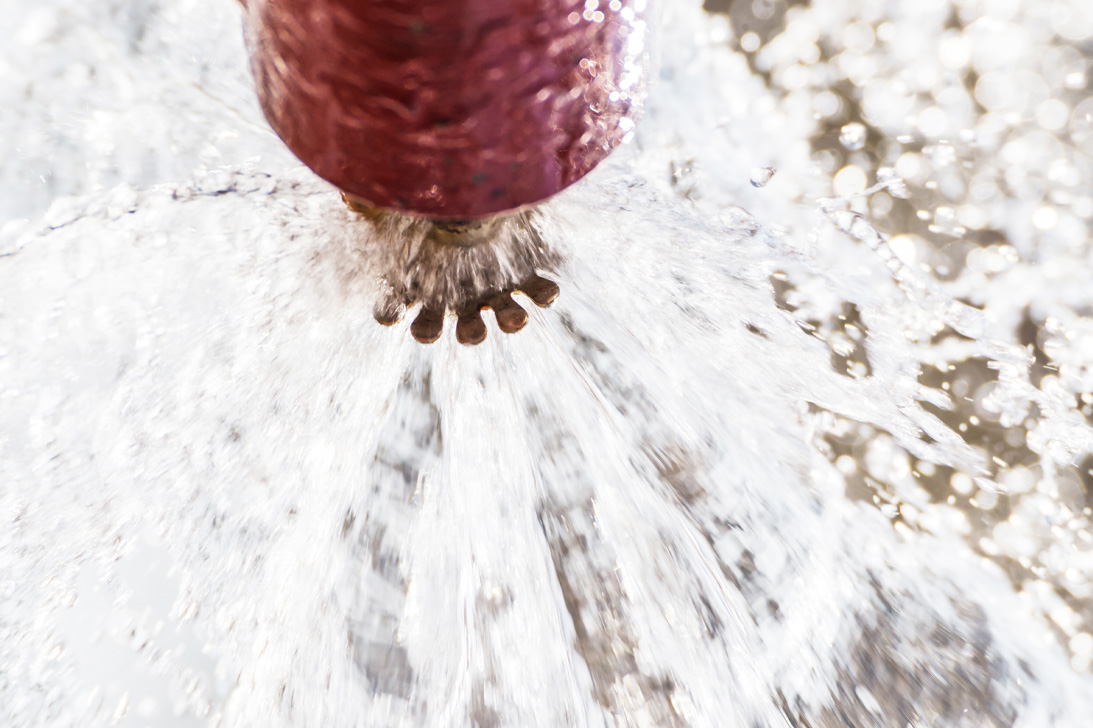 An early morning 911 call alerted the fire department of smoke coming from a large warehouse storing used auto parts. When the fire fighters arrived, they heard a water gong, indicating that the buildings’ sprinklers were working. In addition, they saw white, steamy smoke pushing out around the closed and locked overhead rolling bay doors.

They immediately started cutting the overhead doors with rotary saws to gain entry. Once inside, they encountered heavy moist “cold smoke” from the sprinklers, diminishing visibility inside the warehouse. They then shut off the sprinklers. By shutting off the sprinklers, additional oxygen flowed into the building through the overhead door openings before the fire was actually extinguished, thus bringing the fire back to its free-burning state deep inside the warehouse. Conditions immediately deteriorated, forcing the fire fighters to retreat. A large portion of the roof collapsed, and the fire burned under the collapsed roof for four days while fire fighters tried to remove the roof. The building was a total loss.1

Fire sprinkler systems have been around for centuries. Most experts cite Ambrose Godfrey as the inventor of the first successful automated sprinkler system in 1723. He outfitted a barrel with a TNT charge and wick igniter. When the wick was ignited, the TNT blew up the barrel which then dumped the water in the barrel on the fire.2

Wikipedia also says that Leonard da Vinci designed one of the earliest sprinkler systems by automating his patron’s kitchen with a super-oven and a system of conveyor belts. In a comedy of errors, everything went wrong during a huge banquet and a fire broke out. “The sprinkler system worked all too well, causing a flood that washed away all the food and a good part of the kitchen”.3

Today, sprinklers are designed to contain a fire, impede its propagation and intensity, allowing fire fighters time to respond to the fire. In the warehouse case mentioned above, the sprinkler system would have at least contained the fire, but the fire fighters turned off the automatic sprinklers. This combined with the additional oxygen that entered the warehouse when the overhead doors were cut, allowed the fire to continue to burn and result in a total loss.

It’s important to note that sprinklers aren’t triggered by smoke - and they don’t all go on at once. The image of a small amount of smoke triggering all the sprinklers in a building, soaking everyone and everything inside is simply not true. Sprinkler systems are heat activated, one sprinkler head at a time. Most fires require only one or two sprinklers to slow a fire down.

According to a recent study, fires in non-sprinklered facilities averaged an estimated $1.9 million in damages compared to $638,000 in sprinklered facilities. The National Fire Protection Association (NFPA) 2013 report ‘U.S. Experience with Sprinklers” concluded that 48% of reported structure fires indicated some type of sprinkler – wet or dry pipe – present. In the NFPA report, 85% were wet pipe; 12 % were dry pipe; 3% other.

The difference between wet and dry pipe can be critical in fighting a fire. In wet pipe systems, the overhead sprinkler piping is filled with water under pressure. Dry fire sprinkler systems do not have water in the direct, non-heated sprinkler piping, but only pressurized air or nitrogen. The pressurized air holds back the water supply at a main dry-pipe valve. Because water must travel from the valve to the piping and sprinklers, there can be a delay of up to 60 seconds in fire suppression. Dry pipes, however, can be an addition to a larger wet pipe sprinkler system in an environment with freezing temperatures, like walk-in refrigerators, loading docks and warehouses.

Time for a Tour

Sprinkler systems have been proven to make a significant contribution to the improvement of conditions in fire environments by lowering temperatures, diluting fire gases and improving visibility. When failure occurred, the leading reasons were system shutoff (62%) and manual intervention that defeated the system (20%). When operating equipment was ineffective, the leading reasons included water not reaching the fire (36%) or not releasing enough water (31%).

Fire fighters are skilled at fighting fires. They are not always experts in all of the automatic systems installed in commercial buildings. By knowing how automatic sprinklers work and what happens to water pressure in a fire fight will improve fire fighters’ ability to fight the fire — and to know when it is reasonable to shut off the sprinkler system.

Most fire fighters have basic information on what hazards exist in their response area, the nature of those hazards, the number of hazards and their locations. However, the best way to learn something is through hands-on-knowledge. AXA XL Risk Consulting offers AXA XL clients the opportunity to boost fire fighter preparedness by inviting them to take a guided tour of the facility or site with our expert fire protection engineers who will talk about the types of systems in place at the facility, how to use those systems effectively - and crucially, what to do if something goes wrong.

John Frank is Senior Vice President of the AXA XL Risk Consulting’s Loss Prevention Center of Excellence, where he is involved in loss prevention research and loss prevention training.