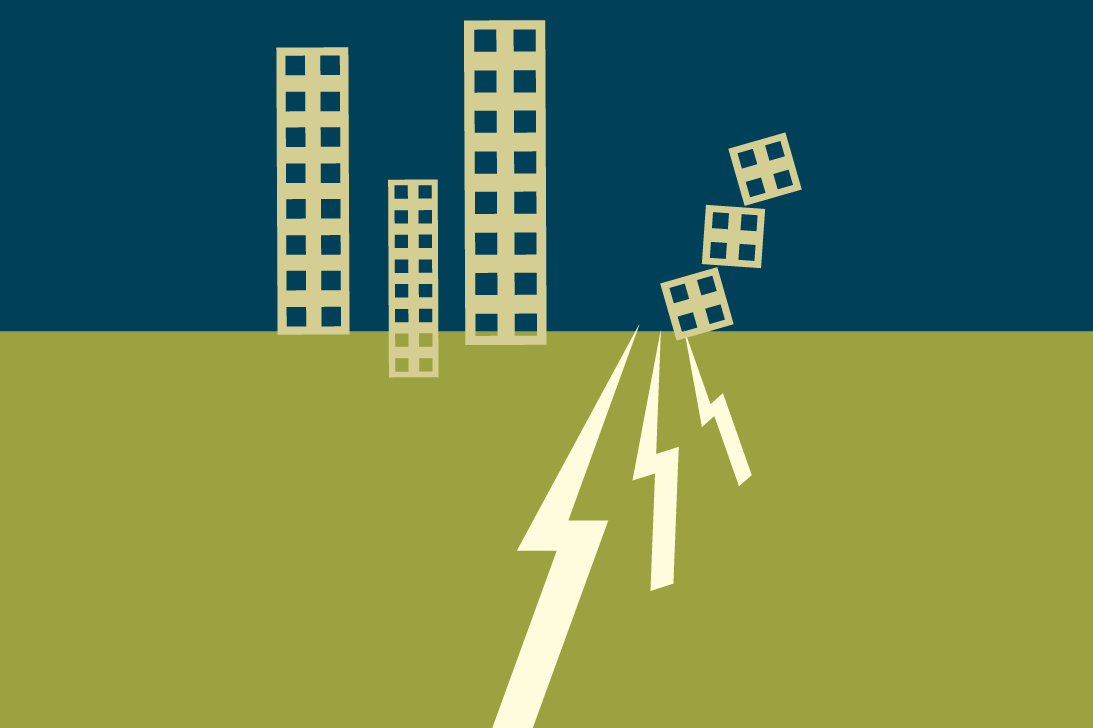 Feel the Earth Move? Drop, Cover and Hold On!

Earthquakes, like volcanoes, hurricanes and tornadoes, are among the most powerful natural forces on the planet. They are capable of causing widespread, catastrophic destruction. Earthquakes happen along cracks in the earth’s surface, called fault lines, and can be felt over large areas. They usually last less than one minute. ​There are essentially four types of earthquakes: tectonic, volcanic and collapse earthquakes, which are natural phenomena; and explosion earthquakes, which are human-induced, triggered by the detonation of chemicals or nuclear devices.  Tectonic earthquakes are by far the most common. Of these, the great majority occur along the boundaries of the earth’s tectonic plates as they push together, pull apart or slide alongside one another. ​When will the “big one” occur?

There are no early warnings for an earthquake. Every few months, we read a story about the possibility of a “big one” (over 7.0 magnitude) hitting Southern California. The swarm of over 400 quakes of 1.5 magnitude or greater in Southern California this past month alone has upped the stakes of the “big one” occurring soon. ​According to Southern California Earthquake Center director Thomas Jordan, the most famous fault in the world has been quiet for a long time. “Too quiet” is how he puts it. He says the San Andreas Fault is now “locked, loaded and ready to roll”. ​The San Andreas Fault sits at the region where the North American Plate is sliding past the Pacific Plate, a boundary known as the strike-slip fault. It is actually a network of fault systems that snakes from the Salton Sea in the Mojave Desert to the Mendocino Coast in the north of California. The region that experienced the recent swarms (near the Salton Sea) is a portion of the fault that has built up a lot of stress. It hasn’t ruptured in 326 years, according to the Orange County Register. ​“Locked, loaded and ready to roll?”​To find out what could really happen when the “big one” finally strikes, a team of earthquake experts created what is called the ShakeOut scenario. In 2008, seismologists modeled how the ground would shake during a 7.8 magnitude earthquake on the San Andreas Fault in Southern California, the portion of the San Andreas fault that has been identified as the most likely source of a very large earthquake in California. The scenario they created was a hypothetical 7.8 quake striking Coachella Valley, California at 10 a.m. on November 13, 2008. Engineers and social scientists then used that information to estimate the resulting damage and impacts. In the minutes following the earthquake, the earthquake “waves” traveled across California, leveling older buildings, disrupting roads and severing electric, telephone and water lines. But the quake was only beginning.​Hundreds of fires started. Roads were blocked. The water system was damaged. The lines that bring water, electricity and gas to Los Angeles broke during the quake. While most modern buildings survived the shaking, many were rendered structurally unusable. One scientist behind the 2008 ShakeOut scenario, USGS seismologist Lucy Jones says the report team was surprised by the extent of the fire damage from the quake. ​What if the Santa Ana winds were blowing? What about Los Angeles’ water supplies? LA keeps a supply of water on its side of the San Andreas Fault. However, if the quake struck today (2016), the reservoirs have already been drained by the current drought and there wouldn’t be enough water to last six months. Overall, such a quake would cause some $200 billion in damage, 50,000 injuries and 2,000 deaths, the researchers estimated. “It’s not so much about dying in the earthquake. It’s about being miserable after the earthquake,” says Jones. ​

One scientist behind the 2008 ShakeOut scenario, USGS seismologist Lucy Jones, says the report team was surprised by the extent of the fire damage from the quake.
What businesses learned from the Northridge, California earthquakeWhile you might expect cracks to the foundation of a business property during an earthquake, that is not the most common damage resulting from tremblors in California. More typically, businesses suffer property damage AFTER the quake shakes a building. Following the Northridge earthquake, the shaking activated or damaged indoor sprinklers, which sprayed water, wreaking havoc on office fixtures, machinery and inventory. The resulting damage from water sprinkler damage can often far exceed the damage to the structure itself.​After the Napa earthquake in 2014, the Federal Emergency Management Agency (FEMA) studied 32 buildings with fire sprinkler systems and found five that had sustained sprinkler system damage during the quake. The damaged systems had sprinkler breakage resulting in water damage, short sprinkler hangar failures and impact with adjacent components. The quake happened early in the morning in a business district, when there were no employees on site to shut off water valves. The majority of sprinkler system damage was from the building shaking and swaying. This movement caused the sprinkler system – which had not been properly braced – to come into contact with other building systems or structural members that then damaged the sprinklers and fittings. ​If your business has a sprinkler system in place, it needs to comply with section 9.3 of the National Fire Protection Association’s Standard 13 Standard for the Installation of Sprinkler Systems, which is designed to limit the impact of this differential movement so the sprinkler system can function as intended after, and potentially during, the seismic event. The standard requires sway bracing and restraint for system piping. ​Another important preventative measure is to have fire protection systems in place. As mentioned in the ShakeOut scenario mentioned above, there are generally a higher volume of fires due to ignition sources that have become exposed during a quake. These sources can include electrical hazards such as disconnected or exposed wires and panels, along with fuel sources that may spill due to ruptured tanks or broken piping connections. Leaks involving natural gas and propane are also a source of fire once the gas is ignited. The installation of a seismic shutoff valve on the gas line would reduce the chance of a fire or explosion due to leaking gas.​FEMA (Federal Emergency Management Agency) offers businesses a list of specific things to do to protect your property from an earthquake. For example:

FEMA also offers a Small Business Toolkit with advice on what to do after a disaster. ​Drop, Cover and Hold On!​Everyone everywhere should know how to protect themselves during earthquakes. All 50 states and 5 US territories are at some risk for earthquakes. And, they can happen at any time of the day or year. One basic piece of advice is to practice how to “Drop, Cover and Hold On!” Look around your place of business and identify safe places such as under a sturdy piece of furniture or against an interior wall so that when the shaking starts, employees will know to “drop to the ground, cover their head and neck with their arms, and if a safer place is nearby, craw to it and hold on.” ​On October 20, 2016, over 19.7 trillion people in the US participated in what is called the Great ShakeOut Earthquake Drills. ​These are annual opportunities for people in home, schools and organizations to practice what to do during earthquakes and to improve preparedness. _______________________________________​For more information about protecting your business before, during and after an earthquake, contact Peter J. Gore Willse, Director of Research, +1 860 293 7900 Email: peter.willse@xlcatlin.com