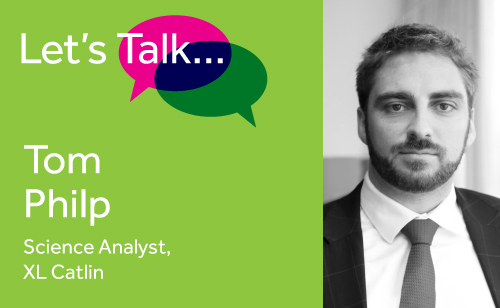 Let's Talk: El Niño - What is it and what are its effects?

This year, El Niño has secured its place in headlines around the globe, predicted to be one of the largest on record. We asked Dr. Tom Philp, Science Analyst at XL Catlin in London, to explain this phenomenon, and its implications as far as risk management is concerned.  Tom received a PhD in Atmospheric Science from the University of Reading and has also worked as a researcher at the University of Miami and at the National Oceanic and Atmospheric Administration (NOAA) in the U.S.

We now know a major El Niño event is currently occurring. What exactly is an El Niño?

El Niño events are linked to the distribution of Sea Surface Temperatures (SSTs) in the Tropical Pacific. To give you some background, in a normal year tropical SSTs are on average cooler in the East Pacific and warmer in the West Pacific. This temperature difference sets up an east to west surface wind. On reaching the warmer west, air rises, starts to cool and travel back towards the east at upper levels, eventually sinking over the cooler water in the East Pacific, where the process begins anew. This flow of air above the Pacific is known as the Walker circulation.

An El Niño occurs in years when the warm center in the West Pacific spreads and shifts to a more eastward location than usual. If this shift in the warm SSTs is persistent enough, the region of rising air shifts with it, in turn disrupting all of the other circulation patterns around the world. This has a knock on effect on global weather and climate.

Why should we care about El Niño from a risk management point of view?

Quite simply, from a global perspective, the biggest concern is that shifts in the circulation patterns cause wet and dry spells in different places to deviate from normal. Although that might sound pretty insignificant, the reality is that this often causes huge impacts to property and agriculture through floods and drought in areas that either aren’t prepared, or just can’t be prepared, for disruptions to the norm.

Are we expecting big impacts from the El Niño this year?

Undoubtedly. Although El Niño is still ongoing, it usually peaks around December and then quickly fades away a month or two after that. Given that it started back in April/May, a lot of the impacts from this year’s event have likely already happened, or are ongoing.

There have been reports of drought and record temperatures in parts of Australia, the largest drought in decades in Ethiopia, and a global coral bleaching event for only the third time in recorded history, caused by higher than usual SSTs.

Does it also have an effect on the hurricane season?

Yes, and not only the Atlantic season - it is thought to have an impact on hurricanes worldwide.

Generally for the Atlantic, El Niño events are actually associated with lower than average hurricane activity for a number of reasons, one of the main ones being that the shift in the circulation patterns worldwide often causes wind speeds in the upper levels of the tropical Atlantic atmosphere to be stronger than usual. These strong winds at upper levels often cause a hurricane to dissipate, if it even manages to form in the first place. This year the Atlantic has seen a lower than average season so far, likely because of some of the effects of El Niño.

The size of this year’s El Niño has made headlines across the globe. When was the last time we had an event of this size?

This is a difficult question to answer. As it stands, 2015 is shaping up to be the warmest year we have on record by a substantial margin, due in no small part to this year’s El Niño. However, there is the need to remove the climate change signal in the global average temperatures if wanting to compare how strong this El Niño is to past events. The 1997/98 El Niño is currently the strongest event on record, with Pacific SST anomalies of +4 to +5°C. Although this El Niño is weaker than that at the moment, with anomalies at the moment standing at around +3°C, we could still be waiting for its peak, so there is a chance it could get to 1997/98 levels.

Importantly though, we should try to not get bogged down talking about the strength of El Niño events, as that is quite an abstract concept. Even weak and moderate events have huge global impacts – it all depends on where the shifting circulations move the areas of rain and drought. Whatever its intensity, every El Niño has the potential for huge global impacts.

Want to know more? You can reach Tom on: tom.philp@xlcatlin.com
Subscribe