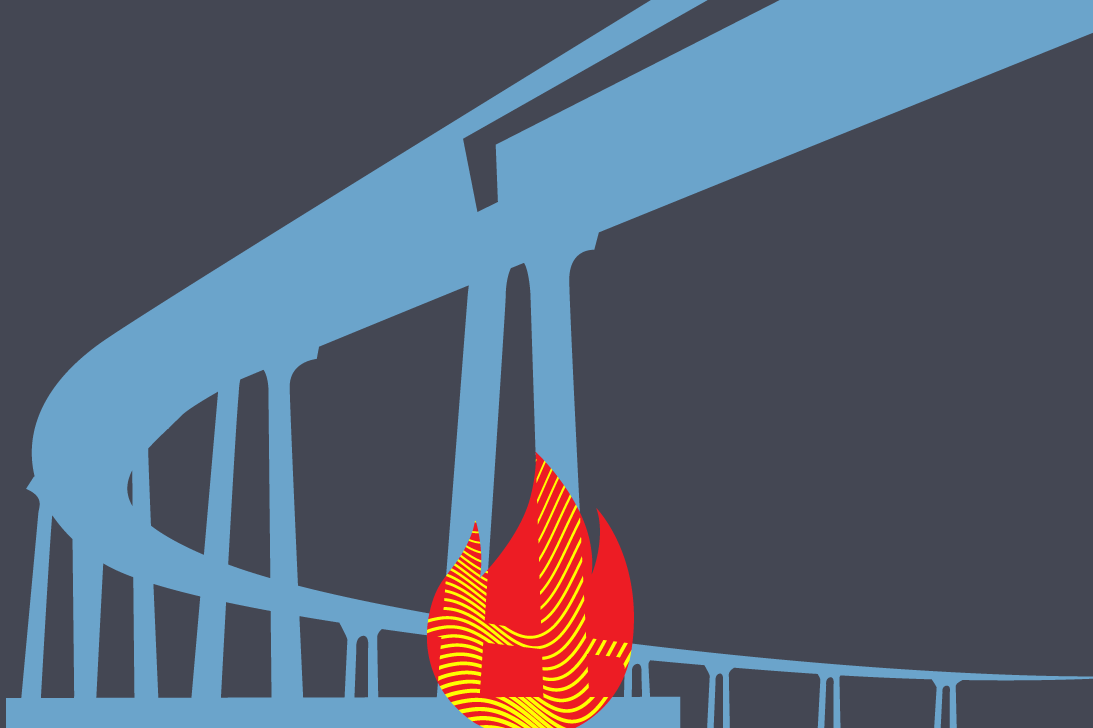 On March 31, 2017 during Atlanta’s evening rush hour, a massive fire erupted underneath an I-85 overpass. The fire started at approximately 6:15 PM in a state-owned storage area under the highway bridge. The storage area contained high-density polyethylene (HDPE) pipes. The resulting heat from the fire caused the collapse of a 100-foot (30.5 meters) section of I-85 northbound. There is a fire station approximately 1000 ft. (400 m) away from the overpass. As firefighters attacked the fire, the concrete started spalling and the fire fighters were forced to pull back. The bridge collapsed minutes thereafter. Two airport crash trucks were called to the scene and applied foam with good effect. Twelve hours later the fire was still smoldering under the collapsed roadway.

Thankfully, there were no reported injuries to the public or to the fire services responding to the event. Typically, about 250,000 vehicles use this bridge daily. Recent reports indicate that the bridge will be reopened in May; less than two months after the incident due to expedited reconstruction.

The NFPA (National Fire Protection Association) Fire Protection Handbook cites similar fires to the Atlanta bridge fire. All required extensive repairs, but didn’t collapse. Social media posts about the Atlanta bridge collapse expressed general disbelief that such a seemingly innocuous fuel load such as HDPE pipes could cause such a major fire and collapse. It must be remembered that bridges might not be designed to resist a fire like this, even though they are of massive noncombustible construction.

What loss prevention lessons can be gleaned from this incident?

Our research has shown that even the best public fire brigade located next to a facility is not a substitute for sprinklers.

Based on media photos, the Atlanta bridge appears to have failed at the connections to the supporting pier. “Concrete starts to crack at 500 ºF, suffers large cracks at 1,000 ºF and melts at 2,5000 ºF, ” says Andy Herrmann, a past president of the American Society of Civil Engineers and a 40-year consulting engineer in New York City.

While bridge collapses are not unheard of, most collapses are the result of overturned gasoline tankers, such as the 2007 I-580 East Connector collapse in Oakland, CA. A tanker truck carrying 8,600 gallons (32554.5 liters)  of unleaded gasoline overturned on the connector from Interstate 80 West (from Berkeley) to Interstate 880 south at 3:42 AM on Sunday, April 29, 2007. The intense heat from the fuel spill weakened the steel structure of the roadway above, which served as the connecting ramp from I-80 (from San Francisco) to I-580 East (Oakland).  About 168 feet (51 meters) of the upper roadway collapsed onto the lower connector. The truck driver suffered second degree burns on his hands, but was able to walk 1.5 miles (2.4 kilometers) to a gas station, where he found a taxi and was given a ride to Oakland Kaiser Medical Center. No other vehicles or persons were reported to be involved in the accident. On May 7, 2007, the I-880 connector re-opened at 4:30 AM to traffic. Substantial work was done to retrofit the strength of the structure, which had sunk nine inches (22 centimeters) due to the collapse of the I-580 connector onto the I-880 connector.

Contrary to public perception, heat can damage concrete and it can cause reinforcing or any structural steel to lose strength. Think of World Trade Center 7 which collapsed because of slow-burning fires, not explosive jet fuel. Fire can defeat concrete and steel.

John A. Frank, P.E., FSFPE, CPCU is Senior Vice President of XL Catlin’s Property Risk Engineering Loss Prevention Center of Excellence.   He can be reached via email at john.frank@xlcatlin.com or via phone at +1 404-431-2673.