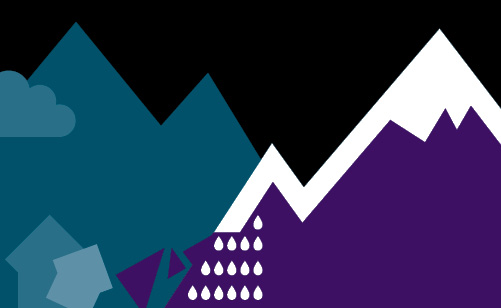 Permafrost is soil or rock which has been frozen for at least two consecutive years—although, most of it has been around for thousands of years. It covers 20 to 25% of the earth’s landmass, and is found in the Arctic, Antarctic and high-altitude mountains.

Now, global warming is causing large tracts of it to thaw. Frozen organic material decomposes as it thaws, releasing greenhouse gases—eventually as much as twice the carbon in our atmosphere now. This new carbon cloud will further accelerate the climate change that started it!

What Happens When It Melts?

As the permafrost thaw deepens, it reaches beyond the topsoil and rubble into the permafrost bedrock—massive pieces of solid rock glued together with layers of ice.

The International Panel on Climate Change (IPCC) reports increasingly massive rock slides in the past two decades. As the thaw climbs up the mountain, bigger landslides will start at higher altitudes. Permafrost and glacial water also runs down into nearby pits, forming unstable lakes, prone to flooding.

How Big is the Alpine Impact?

Permafrost covers nearly the entire Alpine range. In 50 years, most of it will be gone. Up to 6% of Alpine villages are standing directly on permafrost, more than half of which is about to melt. Train tracks, ski lifts, cable cars, and businesses, are directly anchored in permafrost. Thawing, sinking ground will undermine those foundations. Streets, bridges, viaducts, retaining walls, and tunnels could be blocked, damaged or destroyed in an avalanche or mudslide. Oil, gas, and water pipes could leak. Streets, buildings, factories, and air strips could become unstable. Transnational power lines could fail, causing cross-border blackouts.

The Alps are also home to many of the biggest dams in Europe. Thawing permafrost can send massive landslides into reservoirs, creating lake tsunamis. In 1963, a landslide hit the Vajont Dam in Italy, annihilating several villages and killing 2,000 people. Even if immediate damage is less severe, dam overflows cause erosion, which causes further landslides and floods.

The 10-day European heat wave in 2003 was the hottest Alpine summer in a recorded history of 1250 years.

Extended, high temperatures sent the thaw 2 meters deeper than before, all the way down to the bedrock. It unleashed landslides across the Alps, including one at the Matterhorn in Switzerland, where 90 people had to be evacuated. In fact, 5 Swiss landslides have each unleashed 1 million cubic meters of rock. Four struck in tourist areas—all were caused by permafrost or glacial melting.

The Bernese village of Guttannen has been in the news since 2005, when a permafrost thaw launched a 500,000 cubic-meter rockslide. The continuing thaw has created landslides and dangerous debris buildups. In 2009, heavy rainfall overloaded one of these buildups, sparking another massive landslide. A decade of debris has raised the river bed, causing frequent floods. Houses near the river will have to be demolished. Floods block the valley road more and more often. Floods and landslides in Guttannen have even hit the international gas pipeline between Italy and Central Europe, which had to close in both 2009 and 2010 for repairs.

It looks like a matter of time before an avalanche destroys Guttannen. One option remains: village residents and businesses will have to move…but not to the valley village of Innertkirchen below! It is likely that a massive avalanche from Guttannen could create a false dam, blocking the river Aare. If heavy rainfall followed, water pressure could dislodge the false dam, releasing a tidal wave of destruction all the way down to the valley.

How Does This Affect Business?

Tourism in the Alps generates USD 65 billion in annual turnover, and employs 10-12% of Alpine residents. Winter tourism has been dropping as rising temperatures force low-altitude ski slopes to shut down. Some resorts have turned to snow manufacturing, a short-lived solution. Rising temperatures will eventually make it unsustainable.

Add to that landslides, floods, and destabilized foundations from melting permafrost and glaciers. Guttannen’s situation is an example of an extreme permafrost threat. Preserving human life is paramount, and the fact is that switchback roads and narrow valleys already make emergency access and rescue difficult in the Alps. Where the frequency and scale of landslides and floods become impossible to handle, residents and businesses will need to be evacuated, and surrounding hiking trails and other tourist infrastructure barred to the public.

On the other hand, Pontresina, Switzerland has made a name for itself as a “permafrost pioneer”. In 2001, the 20-meter thick permafrost on the mountain above was ready to thaw. By 2003, the town had erected a USD 2-billion dam network to contain up to 100,000 cubic meters of mud, or 240,000 cubic meters of debris in a landslide. Good answer; they protected residents, businesses, and tourists.

What is the outlook for tourism in the Alps? That depends on the response to the threat.

The EU project AdaptAlp has published a risk assessment and recommendations to help Alpine communities adapt and thrive. Their assessment exposed dissimilarities across the region, which made it clear that a one-size-fits-all approach will not work. To become safe and sustainable, each community will have to develop its own integrated risk model, which incorporates local socio-economic, geological and meteorological (weather and climate) factors.

Regional planning and hazard maps need to be revised in detail, so that authorities can designate safe residential, commercial and industrial zones. Revised hazard maps in Switzerland have incorporated 300-year probability assessments for certain incidents, rather than the original 100 years. That might be enough, or it might not. Because climate-change consequences are difficult to predict, the EU recommends constant monitoring, and revised risk analyses every 5 to 15 years.

Winter avalanche loss-prevention measures have advanced in the past fifty years, and the evidence shows they are well worth the investment. Defensive barriers, use of mobile technology, and better emergency procedures have saved lives, and contained thousands of destructive avalanches before they could strike resorts and transport routes. In contrast, warm-weather measures like the dam in Pontresina and recent afforestation in Austria are too few and far between. They need to be adopted throughout the Alps.

A lot depends on stakeholders engaging in an ongoing risk dialogue. Businesses and the public need to understand the impact of climate change, including how to prepare for emergencies and act on early warning systems.

Risk experts from the insurance sector can help to educate stakeholders about the evolution of Alpine risk. Risk engineers can offer advanced, integrated risk models, plans for monitoring and loss-prevention, and emergency and reconstruction remedies. Risk engineers also advise on improved building guidelines for vulnerable zones, and help companies make the most informed decisions about business development. Insurers mitigate the final risk element through coverage for various liabilities, building and inventory damage, motor-vehicle damage, and environmental damage from landslides, mudslides, and floods.

Change is here! Thawing permafrost, melting glaciers, and overall warming will have a powerful impact on Alpine businesses and lifestyles. Is snow disappearing in your area? It may be time to transition to warm-weather activities. Is the thaw on steep slopes making housing unsafe? More compact development can increase safety and reduce costs. Business owners who adapt now to get ahead of the change will help keep the Alpine dream alive for everyone!

Back under starter's orders: how horses were cared for during the COVID-19 lockdown

During the lockdown measures put in place to restrict the movement of people and try to halt the spread of COVID-19, horse owners had to take steps to ensure the safety and wellbeing of their staff and their animals. As horseracing becomes the first sport to recommence after the easing of lockdown, Chris
Read More

As the economy prepares to reopen, commercial bonds can help

As national and local governments take steps to reopen the economy after the COVID-19 shutdown, businesses are exploring ways to navigate through uncertainty. The team at AXA XL remains closely connected to customers and brokers, providing insights on how commercial bonds can help return to productivity
Read More