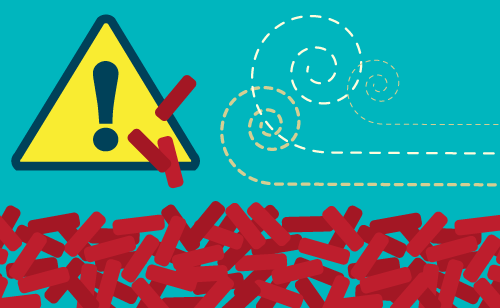 Legionella  bacteria are one of the top three causes of non-epidemic, community-acquired pneumonia, and are cited as the indoor building contaminant bacteria most likely to result in mortality. Legionella bacteria are found naturally in the environment, usually in warm water. People breathe mists or water vapor that is contaminated with the bacteria allowing it to grow and thrive in the lungs.  According to the U.S. Centers for Disease Control and Prevention (CDC), sometimes the bacteria infect the lungs and cause pneumonia — if so, it is called Legionnaires' disease.

The first recognized outbreak of Legionnaires’ disease occurred in July 1976 following an American Legion convention in Philadelphia. Attendees started to become sick, and several passed away. According to the New York Times, 221 individuals eventually became ill and 34 died.  By January 1977, CDC identified Legionella bacteria as the cause and found it in the cooling tower of the Bellevue-Stratford Hotel, where the convention took place.

Many agree -- regular service and maintenance can help eliminated the problem, the buildup on Legionella bacteria. And, it’s not just cooling towers that need to be maintained.  Improper operation and maintenance of many water disseminating devices or systems increases their potential to harbor, amplify and transmit Legionella  including:

Legionella may also be spread through an HVAC system that is not properly treated and well-maintained. For this to occur, water contaminated with the bacteria must enter the system, through a humidifier, poorly placed air intake unit, or other pathway.

According to XL Catlin’s Environmental Risk Engineering team, the risk of Legionnaire’s disease may be reduced by implementing a written Water Management Program, which should include operational controls that address the temperature to be maintained for circulating water systems; disinfection for cooling towers and HVAC pipes; water system disinfection methods and frequency; and maintenance for water filters and water tanks. Additional controls for whirlpool spas and similar features may include water replacement intervals, and special controls for disinfection and filtration.  Detection of Legionella should trigger a review of risk management procedures. Written procedures for decontamination of devices should be available to deal with an outbreak of illness or for other conditions that have been specified as constituting a substantial risk.

Creation of a water safety program is an effective tool for increasing building owner and property manager awareness of Legionella risks and appropriate controls. The elements of the plan can be used to create a training program for staff responsible for building water systems and maintenance. Effective implementation of a water safety plan and periodic review of controls will establish a standard of care and should help reduce potential liabilities and claims costs.