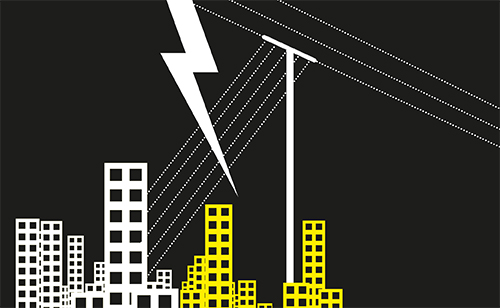 A black swan event, according to Nassim Taleb, is a highly improbable event with a massive impact. A supraregional blackout that stops every life-sustaining service for weeks or months certainly qualifies. Even if it is possible, what can we do?

The pride of the country, the Autobahn, explodes under the wheels of motorcyclists. Decrepit bridges sway beneath the weight of cargo caravans. Despite its Teutonic fortitude in carrying the weight of the Euro, with a debt-to-GDP ratio less than half that of Greece, Germany still carries 78% debt, well above the 60% sustainability limit prescribed by the Euro Convergence Criteria. Public funds are insufficient to reinvent the infrastructure in the next decade.

If anything is more desperate for upgrades than Germany’s road network, it is the power grid. Each year, the digital age places exponentially more strain on grids installed in the mid-twentieth century. Designed to channel fossil-fuel or nuclear currents, the grid delivers power in surges. At its best, it cannot smoothly power 24/7 digital devices. Germany’s energy transformation adds another spin to the power roulette wheel, with on-again, off-again wind and solar sources duct-taped on, ad-hoc, to the antique grid. Solar storms, cyber terrorism, and natural disasters add further dimensions of danger to grids worldwide. The threat of a black-swan blackout, the kind that strikes an entire nation, lasts for weeks, and spreads to surrounding countries, looms large enough to scare authorities.

The US, Switzerland, and the UK have task forces dedicated to identifying and eliminating power-grid vulnerabilities. The US ran simulations in November 2013—Switzerland will do the same in November 2014, enlisting government, emergency services, hospitals, and more—to develop a crisis plan for a colossal, enduring blackout. Communications and life-sustaining services—including food, water and sewage—depend on electricity.

When the internet is inaccessible, studies predict the average citizen won’t have a clue where to turn for life-saving assistance.

Germans have been there and done that. Germany’s 2004 power-outage simulations lead to two, inescapable conclusions, confirmed by a government spokesman in April of this year: first, an extended blackout would inflict severe and lasting damage to citizens, business, and the national economy; second, there’s nothing they can do about it.

Subsequent analyses have spun out the gruesome details, from mayhem in the streets to hospital closures, pandemic, and death. Never mind the economic loss. In 2008, revisiting the topic, the government predicted national losses from a single 24-hour blackout, afflicting the entire country on a winter’s day, would reach EUR 14-30 billion. Unfortunately, these dire predictions can’t change the government’s position, in the midst of Europe’s highest peacetime public debt and the energy revolution, which continuously remaps the power landscape. So, they have proposed the only solution: citizens and businesses should take whatever precautions possible—helpful tips on the Citizen Protection and Catastrophe Prevention website!

What relief or assistance can insurance offer? Before insuring a property, XL GAPS’s risk engineers work together with businesses to identify all potential blackout risks, especially those which might require special attention. Then we offer advice on appropriate risk management, to minimize, or completely avert, potential damage and loss.

After that, the question remains: what can an insurer reasonably cover? Clearly a widespread, regional blackout is not fully insurable. Electronics insurance will certainly mitigate the financial consequences in terms of data, communications equipment, or office electronics. However, in standard property insurance, such losses are only covered if material damage, for example, due to a natural catastrophe, is the cause of the blackout. Even then, losses are only covered to the contract limits of the business interruption coverage, as a part of the standard property coverage. Considering the myriad potential causes and punishing financial consequences of a long-term blackout, at this point, businesses should look for alternatives to the status quo in grid reliance.

A few corporate campuses have, in fact, installed their own mammoth generators, supposed to provide three to four weeks of full power—although they remain untested. However, middle-market companies—the backbone of the German economy—can’t afford such large backup generators.

Is there another solution? The government’s answer hasn’t changed since 2004, but renewable energy has evolved dramatically. Renewables are cheaper, better, and manifold.  Are they reliable and cheap enough for companies to start another energy revolution: distributed generation, power supplied at the point of use? In other words, could businesses become independent of the power grid?

The impediment to relying solely on solar or wind power, on or off the grid, is the inconsistent supply: the wind doesn’t always blow, the sun disappears, at least once a day, and it’s hard to store the power for off-times. We have written previously about eco-friendly, fuel-cell servers. They function as non-stop batteries, and deliver a uniform, uninterrupted current which is especially suited to powering 24/7 digital architecture. The modular design and redundancy of stacks of fuel cells also make them virtually blackout-proof. A number of companies are experimenting with hybrid systems, solar or wind energy operating in tandem with fuel cells, which may provide the greenest and most reliable power stream to date. Converting to on-site, base-load power allows businesses to connect to the grid only for backup, and discard their old backup generators.

Whatever the renewable source, eco-friendly, on-site power generation could solve the grid nightmare for business, consumers, and national economies, reducing emissions at the same time. Middle-market companies that act now could find themselves in powerful positions in the next decade, as the power grid trips and falters more than ever, under the increasing burden of the digital economy. The threat of a black swan blackout may well create another black swan event in Germany, Europe, and the developed world: independent primary power, the next energy revolution.