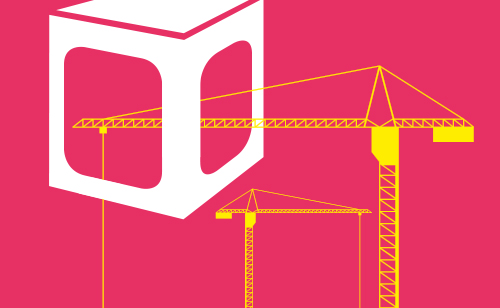 The Austrian-born painter and architect who dubbed himself Friedensreich Hundertwasser was convinced that dreary, repetitive, unimaginative city architecture was the culprit responsible for urban human suffering. He insisted on the creative right of every citizen, and delivered a treatise on the obligation to plant trees, honor nature as a gracious host, and express individuality through apartment windows.

Hundertwasser designed his famous house in Vienna for free, insisting he would rather donate his efforts than watch another ugly building blight the landscape. His buildings were asymmetrical, colorful, modulating structures which seemed to be woven around and through existing plants and topography. The Vienna Hundertwasser House boasts the celebrated wavy floor: “a melody to the feet”.

His theory was that architecture should be alive, in continual metamorphosis, attuned to the real nature of the world, which, though it often appears to be still, is actually composed of molecules in constant motion.

A 3D printer can print a curve as fast as a square, and no doubt Hundertwasser would have been the first to praise this transformative technology as the key to releasing the masses from their cinder-block prisons, and placing cityscape design in their capable and varied hands.

We are now poised on the eve of Hundertwasser’s reality: a sustainable, holographic cityscape, one which can morph in front of our eyes in the course of a day. The more we use them, the faster 3D printers will realize our fantasies, not only in consumer goods, but in architecture and transport, private and public.

Basic house exteriors have already been printed from sand and cement, but beginning this autumn in Amsterdam, the hip, young, award-winning architectural firm DUS hopes to use their own 11.5-foot 3D printer called the “KamerMaker” to print the first complete house, a traditional Dutch canal house made of a variety of sustainable materials, including potato starch. Two other firms, Softkill Design and Universe Architecture, are also planning 3D-printed houses, so who will be first to claim worldwide fame is anyone’s guess.

The limitless possibilities of 3D design will eventually be matched by the same limitless potential of 3D printers. Currently printer size and tested materials are the only inhibitors.

Any shape which is structurally sound can be printed, and far more easily than it would have been through traditional construction. We will surely see more and more building structures which were previously unimagined, as one new idea leads to the next.

In fact, Universe Architecture, also Dutch, has print-ordered the first Möbius house for 2014.

In this case only the interlocking panel frames (6x9 meters) will be printed, and then fiberglass and concrete will be used to fill them.

The UK science ministry has taken charge of kickstarting 3D manufacturing and construction, lending global credence to the industry, by sponsoring a GBP 7 million competition for UK firms who embrace the technology. The science ministry believes that if the UK makes greater strides in 3D printing, it will put the nation in the lead internationally, as companies inevitably migrate from traditional, restricted manufacturing and construction processes to the boundless freedom of 3D design and printing.

UK ministers believe businesses have been reluctant to transition to 3D printing as the norm due to: expensive and untested new materials, the lack of new structural and material standards in each industry, the yet unknown aspects of processing, and a simple lack of courage in exploring the infinite design possibilities.

But the message is clear, 3D printing is the future of both manufacturing and construction.

The initial palette of 3D printing materials includes polymers which are already as robust as, but also far lighter than, traditional construction and manufacturing substances. This means, for one, that less energy is required to move them. This is crucial to developing sustainable transportation, whether mass transit or private vehicles.

Kor Ecologic 3D-printed the first complete car shell, Urbee, in 2011, claiming it had produced the greenest car in the world. The Urbee had an electric motor, supported by one tiny ethanol-fed engine, and got 200 miles to the gallon.

In March of this year James Kor announced plans for the Urbee 2, a two-passenger, 3D-printed car, made of light, but tough, thermoplastic, which he hopes will reach 70 miles per hour on the highway, and use only ten gallons of biofuel to drive all the way from San Francisco to New York.

Considering rapid parallel advancement in autonomous vehicles, and lightweight, 3D-printed construction, how long will it be before self-driving, flying mobility cars demand a new air-traffic stratum? The BBC reported this July that Peter Diamandis, co-founder of Singularity University, believes the flying automobile is imminent. In fact, he claims that the Google X Lab is already developing them.

You drag yourself out of bed, turn on your 3D printer, and print bagels with algae-fortified “cream cheese” for you, your wife, and your four-year old, Tommy, while the morning java is brewing.

You snagged your best shirt last week on a fence, and you have a client meeting today, so you feed the old shirt into the recycler as you step onto the 3D scanner. In two minutes, your measurements have been updated—0.25 cm added post-holidays—and your freshly printed shirt awaits you, tailor- fitted and ready to wear after you towel off from your shower.

Tommy cries up to you from your invisibly-fenced, enhanced-oxygen garden—he’s scraped his knee. You run downstairs and print some DNA-matched antibacterial, self-suturing skin from the skin-gun directly onto Tommy’s knee.

As you pick up your smart-briefcase, you realize you can’t find your cufflinks.

You grab the reprinted cufflinks off the printer as you run out the door, just avoiding a collision with Tommy’s rocking horse—or rather, rocking Harry Potter centaur—modeled on an action-figure and printed at the local tech shop last week.

You scan your travel card on the hood of the next passing driverless, solar-battery-operated, mobility taxi, printed from the latest feather-light, heat deflecting alloy. As you and Tommy kiss your wife goodbye and sit down—the car scans your bodies, positioning a safety harness over each of you optimally and calculating the power necessary to transport your weight as it lifts off and enters the 2nd suburban air traffic stratum.

You drop Tommy off at his playgroup with his 3D-printed, protein-fortified, carrot cookies, and enter the 5th mid-town air traffic stratum.

The taxi door opens, and your seat tips you out onto the fifth floor, 3D-printed, gravity-controlled landing strip projecting from your office window. As you enter the office, you observe that the museum next door reprinted its café overnight, now themed to match the new Salvadore Dali exhibit.

As you gaze out your office window, a 3D printer-copter hovers over a cordoned-off, three-story building one block away, dropping a disintegration pellet onto it. The building sinks in on itself completely within 5 minutes, the pulverized remains are vacuumed for sifting and recycling, and reprinting begins one hour later.

We last addressed the “city of the future” when Masdar City was being built.

With 3D printing, the future is a dream which can be transmuted to physical reality in front of our eyes. The Möbius House will surely be only the first of the mathematical phenomena to materialize through the magic of 3D printing. As fast as we can imagine a change or an improvement, it can become a reality, at a much cheaper price through 3D printing, than through traditional construction methods.

The new realm of structure and substance should drastically expand the potential for green practices, propagating carbon-neutral pockets in established cities much faster than previously hoped. It will exponentially expand the potential for every kind of sustainability and renewable energy: solar, wind, and biofuel energies; automatic, in-built recycling; self-navigating clean-fuel cars; materials and shapes which facilitate natural cooling and heating; minimized waste and reduced resource use and cost.

What’s next? Terra-forming? How soon will we be able to print soil, seeds, trees, or entire crop fields?

Graceful, fluid, 100% sustainable cities that resemble the elven realms in the Lord of the Rings could dot the landscape.

The same megatrends demanding the development of a carbon neutral city like Masdar City still threaten us: the greenhouse countdown, resource depletion, overcrowding, finite land mass, population growth, urban convergence (conurbation and attendant overcrowding), and the desperate need for sustainability in every industry.

But the promise of 3D printing is mind-blowing. It is difficult to gauge how these new materials and structures will advance sustainability, much less how they can be accounted for in construction safety standards.

Risk engineers familiar with new green construction technologies previously had to work closely with insurers to examine the risks associated with carbon-neutral cities. 3D printed cityscapes will require the same meticulous, expert examination and analysis of new materials and structures.

Will these new materials be sustainable? Will they be toxic? Is it possible to combine chemical constituents for safer, less combustible materials which are also resistant to deterioration, but can be dismantled and recycled when it is time to upgrade building or transport designs? What about structural standards?

The only thing certain is that the future of construction and manufacturing lies in 3D printing, and those who want to be at the forefront of this powerful trend need to learn fast.Click here to read the intro of this 3D Printing series: http://xlgroup.com/fast-fast-forward/articles/3d-printing-intro

It’s all about the pace: Using Rapid Results Initiatives (RRIs) to drive change

The Rapid Results Initiative (RRI) approach is a proven method and part of our culture of getting things done at AXA XL, and for good reason. They really work. Having participated in hundreds of RRIs ourselves, we’ve seen how RRIs can initiate quick change, give a boost to a bottom line, and correct
Read More

How to identify disinformation around COVID-19

During times of crisis, the growing demand for information and clarity creates opportunities for spreading disinformation. As the demand for reliable and regular information outstrips the supply of guidance and advice by national authorities, the gap is filled by other, unofficial and unverified, sources
Read More

Cyber security in the time of coronavirus

Changing working patterns With the ongoing spread of coronavirus, government guidance is changing rapidly. In many countries, healthy individuals are being asked for the first time to avoid unnecessary public exposure, for example at large gatherings, on public transport … and in the workplace. As a
Read More